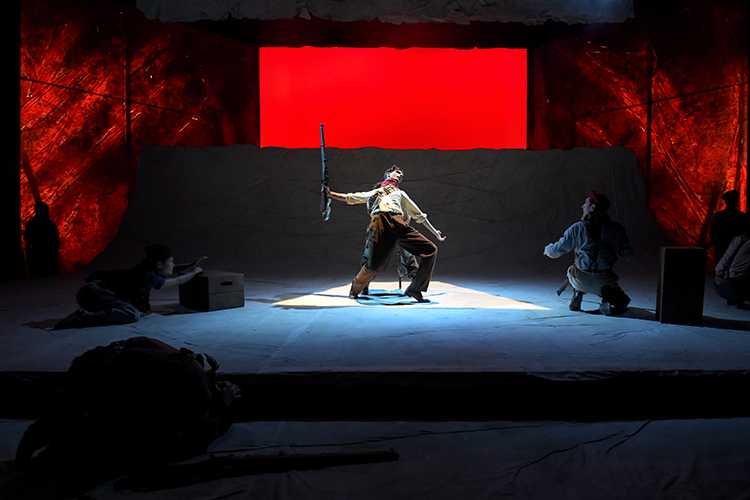 Seriously, there should be a soundtrack of “Heart of Spain: A Musical of the Spanish Civil War” on sale right now! The moving voices of Fernando, the poet (Yohana Ansari-Thomas) and Alice, the journalist (Claire Noelle Pearson), give the audience goosebumps. Thanks to Malcolm Ruhl’s vocal and instrumental arrangements and the musical direction by Mark Sumner, a medley of traditional Spanish guitar and classical western compositions fill Zellerbach Playhouse, at CAL, Berkeley, in a premiere production by U.C.’s Department of Theater, Dance and Performance Studies.

“Heart of Spain,” co-written by U.C. faculty member Peter Glazer, with music by Eric Bain Peltoniemi, introduces an original story set during La Guerra Civil Española (The  Spanish Civil War). Glazer brings to life a snippet from his own family history. A story about camaraderie and the selflessness of human compassion, “Heart of Spain” brings 30s history to life, and it’s about time: this is the war that led to WWII, with Hitler on the side of Spain’s fascist military upstart, Francisco Franco.

Glazer’s writing makes it easy to keep up with the history and timeline of events leading up to the war. “Heart of Spain” takes place in 1936, during the bitter struggle between fascism and democracy in Spain. The musical relives the tale of an international volunteer battalion loaded with reporters, nurses, poets and soldiers. They come to the aid of the Spanish people from all over the world–in a stunning display of social conscience. The story is told from the perspective of the U.S. workers workers who volunteered to defend Spain. They became known as the Abraham Lincoln Brigade, among them Ernest Hemingway, Scott Fitzgerald, and e.e. cummings. During the Great Depression, a diverse group of Americans crossed the ocean, leaving their families and offering their services to democratic forces in Spain.

The stirring anthem “Arriba, Mis Companeros!“  highlights the sense of adventure as the volunteers take up arms against the takeover by Franco, a military general turned dictator—aided by Hitler. Our hearts melt when the U.S heroes are joined by English, Germans, Italians, and Cubans who form the International Brigade.

True to history, the ensemble serves as the main character in “Heart of Spain” in a poignant homage to the Brigade’s comradeship.We love the classical Spanish ballads like Vientos del Pueblo (Winds of the People) that bring up silent tears as we begin to understand the grievances of war.  Never forced, the characters’ motivations slowly unfold. One of the American soldiers, Arthur (Harry Fahn), brings us into his world before the war in his memorable monologue to his comrades. Along the way, we develop distinct relationships with each volunteer.

The sparse set makes a statement of its own, with a large white Constitution-like parchment backed by a wall slathered with blood. The bloody Constitution represents the struggle of people devoting their lives to democracy for Spain, not even their own country. The actors themselves adorn the setting as scenes evolve; their movements contributing to the stage pictures.  During a scene where the actors travel through Europe, they sit and sway to the motion of a train, taking us with them on an historic journey.

Thanks to playwright and director Peter Glazer for sharing and dramatizing an intimate part of his own heritage. Glazer, who sits on the board of the Abraham Lincoln Brigade Educational Foundation, is obviously inspired by the men and women who fought. The world shrinks everyday as people connect and realize we are not so different from each other.

We must step outside our national bubble at times to fight for what we believe. Everyone can save lives. Heroism is giving, acting, educating, and simply knowing right from wrong. We cannot do it alone. As we go forth and vote, let “Heart of Spain” remind us of the bigger picture as does the International Brigade.