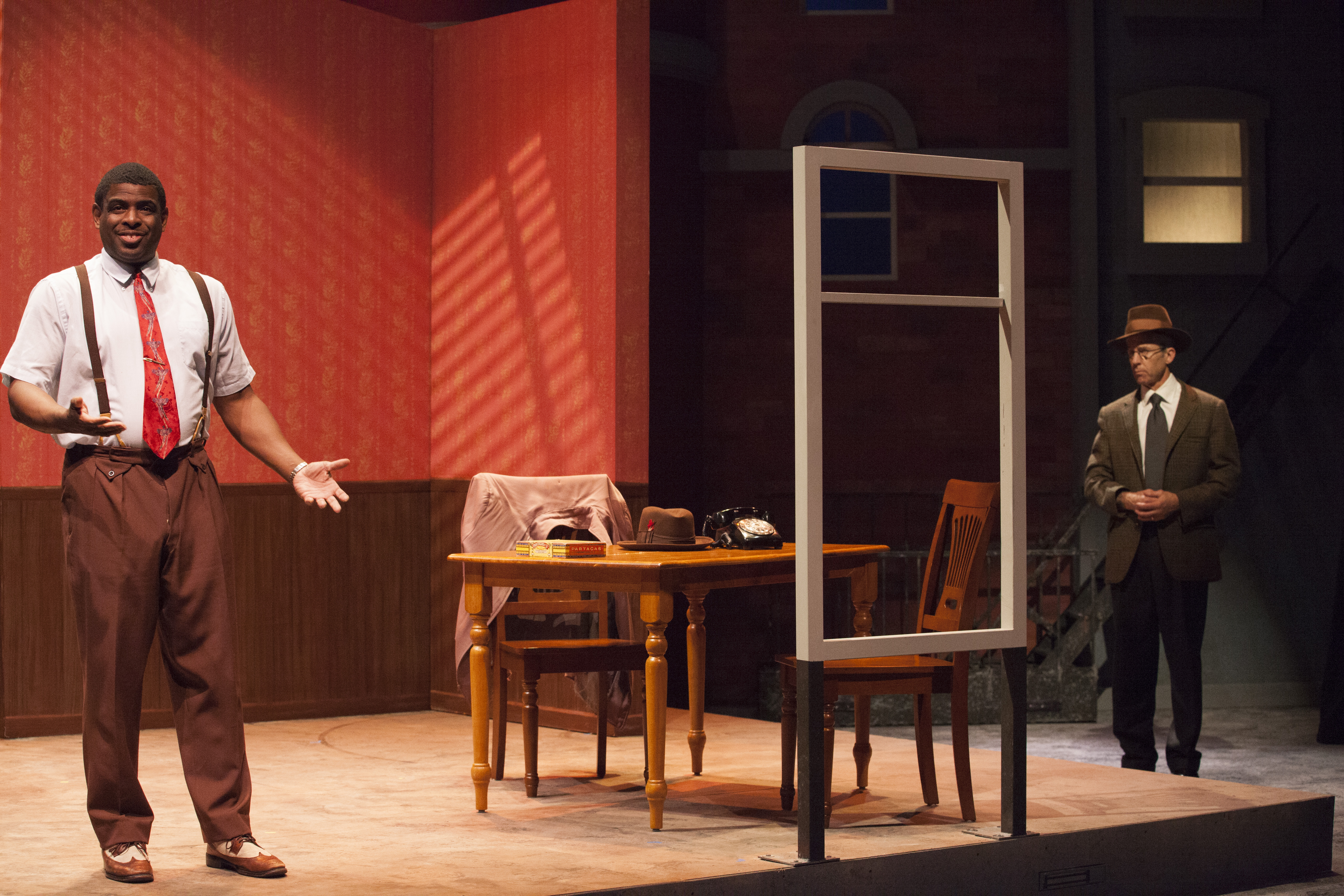 Word for Word’s creative staging of the short story “All Aunt Hagar’s Children” by Pulitzer Prize winning author Edward P. Jones gives us a real lift. A noir mystery set in Washington D.C. in the 50s, the story follows events in the life of The Young Man, played with versatility by Khary L. Moye. Sharply dressed in brown slacks, brown and tan brogues, and overalls, he has come home from the Korean War, where he was a military policeman. A source of pride for the close-knit African American D.C. community, The Young Man represents “one of the few black boys to come home from the war alive to tell about it.”

Rather than adapt this enlightening short story for the stage, Word for Word brings Jones’ complete text to Z Space, with the actors voicing characters’ thoughts and actions via the narration. Though a bit unsettling at first, the style blends into a thrilling and engaging experience. Jones’ Young Man, the war veteran, turns amateur detective to investigate the murder of Ike, whose case has been neglected by the D.C. police. The writer gives us a grieving mother pleading to find the killer, and even a haunting ghost. Even so, “All Aunt Hagar’s Children” remains light-hearted, and peppered with morsels of wry wit.

Jones’ short story has serious undertones, cleverly wrapped in mystery and dry humor. His characters are, at best, neglected, and often repressed in 1950s America. The Young Man persistently worries about being an innocent black man in the wrong place at the wrong time. Over a year has passed without the police doing much about the death of Ike, a Black man. There’s religion, food, and good manners. And some darn good music.

The brilliance of Jones’ short story comes alive in this staging, making multiple connections to U.S. history. Because U.S. history belongs to Black America, their history has been whitewashed and scrubbed from the record. The quiet insights and subtle themes in Jones’ work illuminate aspects of a culture and a history inside my country that is not my own.

A flashback shows us that The Young Man’s mother and her two sisters traveled to D.C. alone, as children. They fled their home and family in Georgia after Miss Agatha was assaulted by a white man and the other girls beat him with rocks. How many children of freed slaves found themselves in similar situations? Furthermore, The Young Man, raised by his mother and aunts never refers to his father. In fact, aside from his boss, who enters to announce his departure for Israel, there are no other men. Even The Young Man’s brother, whom he holds in high esteem, sits at the far end of the Sunday dinner table in imagination only. Is Jones’ Young Man a token youth without a male model, or is he the thing, itself, the innocent, suffering abandoned son?

By portraying the past with integrity, Jones demonstrates the state of the present. As an artist, he shows us ways we can connect, across time and boundaries. In a tremendously divided America, he proposes human connections. I have often thought about these concepts, but Jones’ story makes me feel them. In doing so, I also feel more connected and kin to my fellow Americans.

While Jones is known for his dry wit, some of the humor stems from his narration as performed by the actors. At one point, Velina Brown as Miss Bertha, The Young Man’s mother, in a floral house dress and holding a red pot in both hands, poignantly states that she cooks fried chicken every Sunday, “for herself.” The Young Man adds, “…and her children.” His interjection creates a joke out of a sentence that, on the page, would be simply factual.

Often,  humor comes directly from the talented actors. Brown, every bit the ideal 50s mother, teaches her children to say, “Yes, ma’am,” and to rinse their plates in hot water. A multifaceted character, she is emotionally strong, wittily critical, and a moral compass for her son, The Young Man. Margo Hall generates laughs as Minnie Parsons, the murdered Ike’s downstairs neighbor, and a would-be promiscuous housewife. She wears a ribbon in her hair and a thin robe that seems incapable of covering her legs.

Meanwhile, Kehinde Koyejo, as Miss Parsons’ pet mynah bird, shouts cryptic lines and nips at her feathers, making the scene one of the funniest of the evening. Koyejo shines in each role she plays, from Blondelle Steadman, the friendly neighborhood lesbian, to The Young Man’s great-grandmother, hunched over a cane, with a heavy blanket around her shoulders, in one of several flashbacks.

Through creative staging by deft director Stephanie Hunt, The Young Man traverses Washington’s Shaw neighborhood, in his Ford and on foot. He is constantly haunted by the ghost of Miriam Sobel, “that dead white woman,” as she is called. Played by Sheila Balter, pale and wearing a shroud on her shoulders, she seems to emerge from all corners at any time, gliding lifelessly over to The Young Man. Her presence, and our anticipation that she might appear, keeps us on the edges of our seats.

“All Aunt Hagar’s Children” is a must-see this season on any night. But if possible, do go see it for Z Space’s Annual Fundraising Gala on Thursday, December 1st. The evening is sure to enrich and entertain.