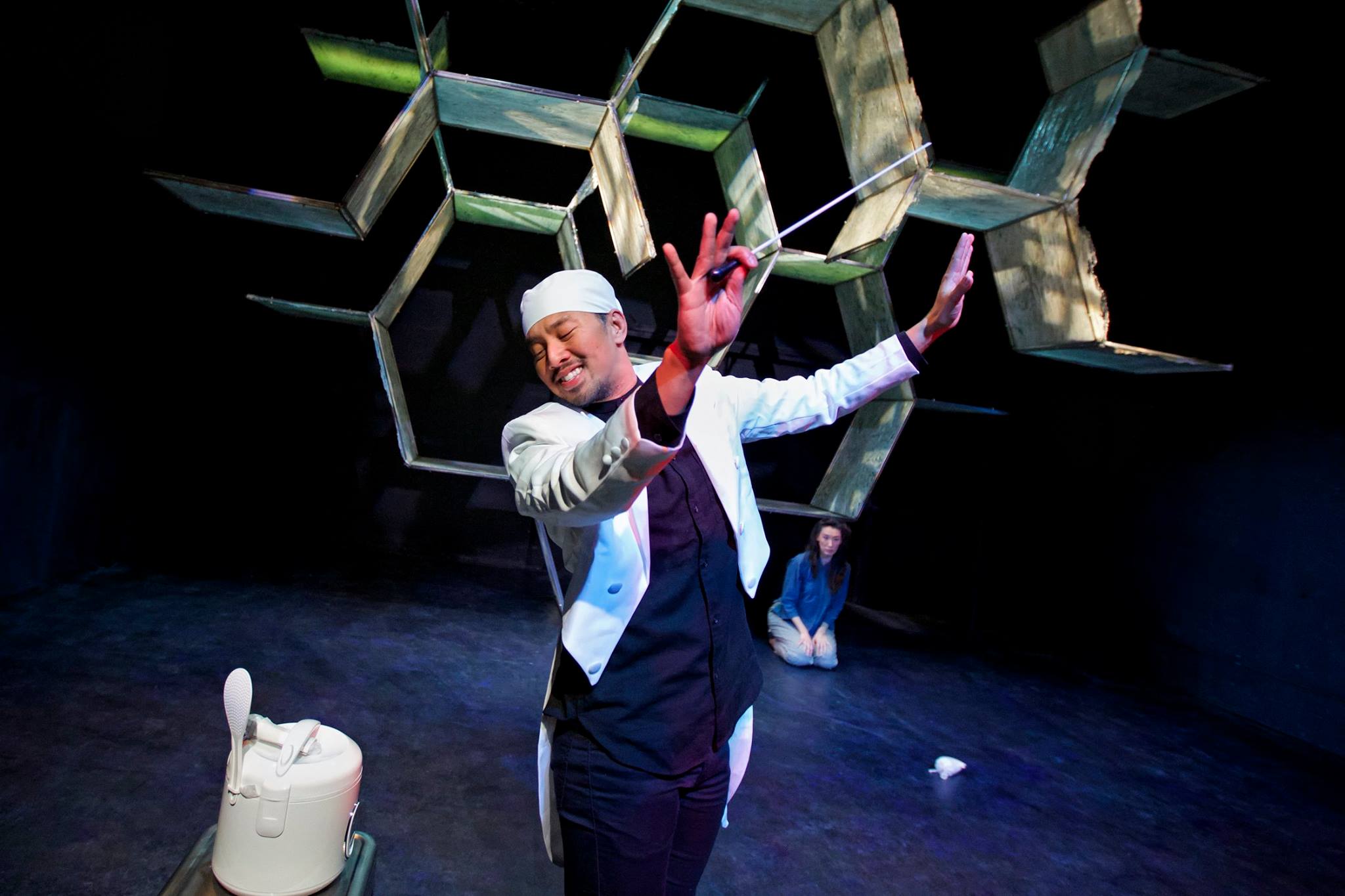 In “You for Me for You,” Playwright Mia Chung and Director M. Graham Smith track two North Korean sisters who are separately fleeing Our Dear Leader Kim Jong-Un. Their journeys lack any logical itinerary, turn surreal, and sometimes pass too slowly. Nevertheless, the sisters encounter moments so full of truth and high comedy that it’s worth the trip that leads us to a most unexpected outcome.

Younger sister Junhee (a brash Grace Ng) questions the mad social order; while her older sister Minhee (a dignified Kathryn Han) obediently accepts all constraints, living in hope of better times. Their questioning versus obedient personalities prefigure even greater contrasts.  One sister is propelled into a nightmarish dream world with its own perverse rules, leaving reality behind. The other sister moves from a Third World life of patriotism and penury to a First World life of abundance and materialism, but leaving her sense of duty behind.

One sister wants out of North Korea. The other lives in hopes of re-connecting with the politically abducted members of her family. The would-be defector tells her sister: “We can miss them from anywhere. I want to miss them on a beach after a large meal.” She waits a beat: “I’m going … Do you want to miss me, too?”

The sisters frequently find themselves forced to maintain an impassive face to mask their true emotions in the presence of others, and sometimes in front of each other. Ng and Han do a champion job of eloquently expressing inner thoughts and feelings with their eyes, voices, and gestures. Their expressiveness is physical and sensitive—moving beyond language.

While one sister escapes across the dangerous border to China on her way west, the other falls down a well and crosses another border much harder to define. Whether the Well-world represents death and limbo, a comatose delusion, or an exaggerated version of North Korean life—life down the Well equals Hell. Agonizing scenes of Kafkaesque bureaucracy, dangerous black market deals, torture, and disappearances, all torment the Well-dwellers.

The other sister establishes herself in New York City. She encounters many white women, all named Liz and all played by the marvelously funny Elissa Beth Stebbins. The first Liz speaks in a fast slur of non-words, totally unintelligible to show that the new Korean immigrant cannot understand English. Time passes and the next Liz mixes in a few recognizable words as the immigrating sister understands more English.  And so on, until her final mastery of English. Each time Stebbins plays a Liz, no matter how disparate from the previous ones, she is completely believable. Chung’s concept and Stebbins’ performance are a joy.

In New York, the immigrating sister feels the absence of purpose in her new life of affluence. The dizzying consumerism confuses her. She has won her way to freedom, but now she needs a purpose. Lonely, she makes one friend, a patient and sweet boy (a gentlemanly Julian Green), a recent transplant to New York from Alabama. Ng and Green have good chemistry, and they are a pleasure to watch together. But even the Man from the South, for all his caring, cannot help fill her emptiness.

The cast is rounded out by the multi-talented Jomar Tagatac, who plays over a dozen roles. He plays a pontificating North Korean doctor who has more rhetoric than medicine; an intense people smuggler who takes each sister across the border; and many nasty characters, male and female, in Minhee’s surreal Well-world.

Scenic Designer Maya Linke’s stark metal fence towering over the stage makes for a fittingly ominous North Korea and a surreal Well-world. Sound Designer James Ard has placed speakers all round to engulf us in their messages. The carefully created sinister atmospheres of the totalitarian state and the surreal dream world contrast effectively with New York’s First World commercialism.

For decades the famines, re-education camps, and dictator cult worship have lured pundits to predict the collapse of North Korea. And yet, it still stands. What keeps it going? Crowded Fire’s production gives us clues to this pernicious mystery. “You for Me for You” takes us to unexpected places and introduces surprising notions. That makes it worth a trip to Portrero Stage to pass through Mia Chung’s strange borders.

“You for Me for You” by Mia Chung, directed by M. Graham Smith, by Crowded Fire Theater, at Potrero Stage, 1695 18th Street, San Francisco, through Saturday, April 1, 2017.  Info:  crowdedfire.org