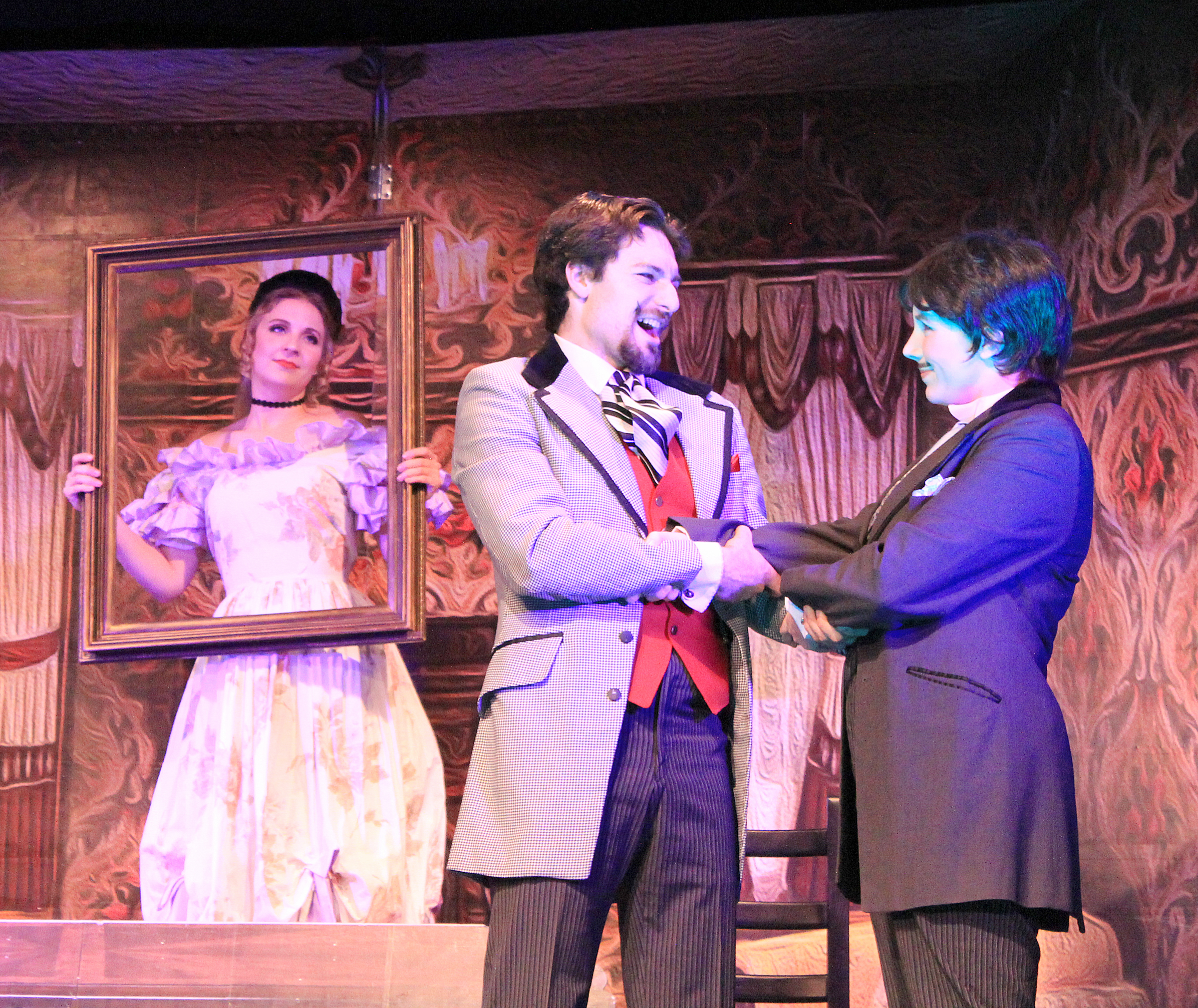 I can see why “The Mystery of Edwin Drood” won Tony Awards at its debut in 1985. Writer and composer Rupert Holmes consistently interlaces witty humor with just the right amount of sass.

“Edwin Drood” uses our imagination to play mind games from start to finish! Marin Onstage presents a high energy, interactive musical melodrama that keeps us engaged until the final scene. The Chairman of the Musical Hall Royale, A Ladies Dramatic Society (dashing Jill Wagoner)  explains that “Drood” is Dickens’ last and unfinished novel. She takes us on a trip through the murder mystery until Dickens’ untimely death abruptly stops the story. At that moment, we in the audience get to vote for a solution to the unwritten ending.

We have to pay attention. We have to help solve the mystery of Edwin Drood. Is he dead or alive? Murdered or runaway?  Throughout, we constantly search for clues. Over several days, we learn about the dodgy crew of family and friends who surround Drood (modest Madison Scarbrough). Neville Landless (charming Amanda Morando) oozes with toxic masculinity as he throws insults at Drood.

As the story unfolds, we see a  twisted mess of romance and family dilemmas. Drood’s betrothed, Rosa Bud has no interest in marrying him. And Edwin’s uncle, John Jasper also pines for Rosa’s  affections.

Each prop adds another level of humor. In the first act, a painting of Rosa Bud is actually Eichenberger on a chair holding a frame around her own face, like a Pinterest board at a wedding. John Jasper raises a minuscule wine-glass shaped puzzle piece to toast their engagement. The tiny piece disappears in his hand as he takes a baby sip from his toy wooden glass.

Did they forget a prop? Was that supposed to be there? “The Mystery of Edwin Drood” makes us wonder if something’s out of place, or if it’s part of the magic. During the comedic song “Off to the Races,”  two large cranks roll green ivy patterned jersey sleeve, while the cast races wooden horses along the hedge. But something goes wrong, and the faux ivy wall slips down like a fallen sock. These accidents add hilarity to the mystery.

I recommend sitting close to the stage to catch the casts’ quirky expressions.

This is such an enjoyable play to be part of, and it’s surely appropriate for kids who have heard a few curse words–if you don’t mind explaining an opium den.

While my vote for the murderer did not win, I was pleasantly surprised by the plot’s twisted and entertaining ending. The Music Hall Royale, A Ladies’ Dramatic Society, brings interactive theater to a new, higher level of laughter.