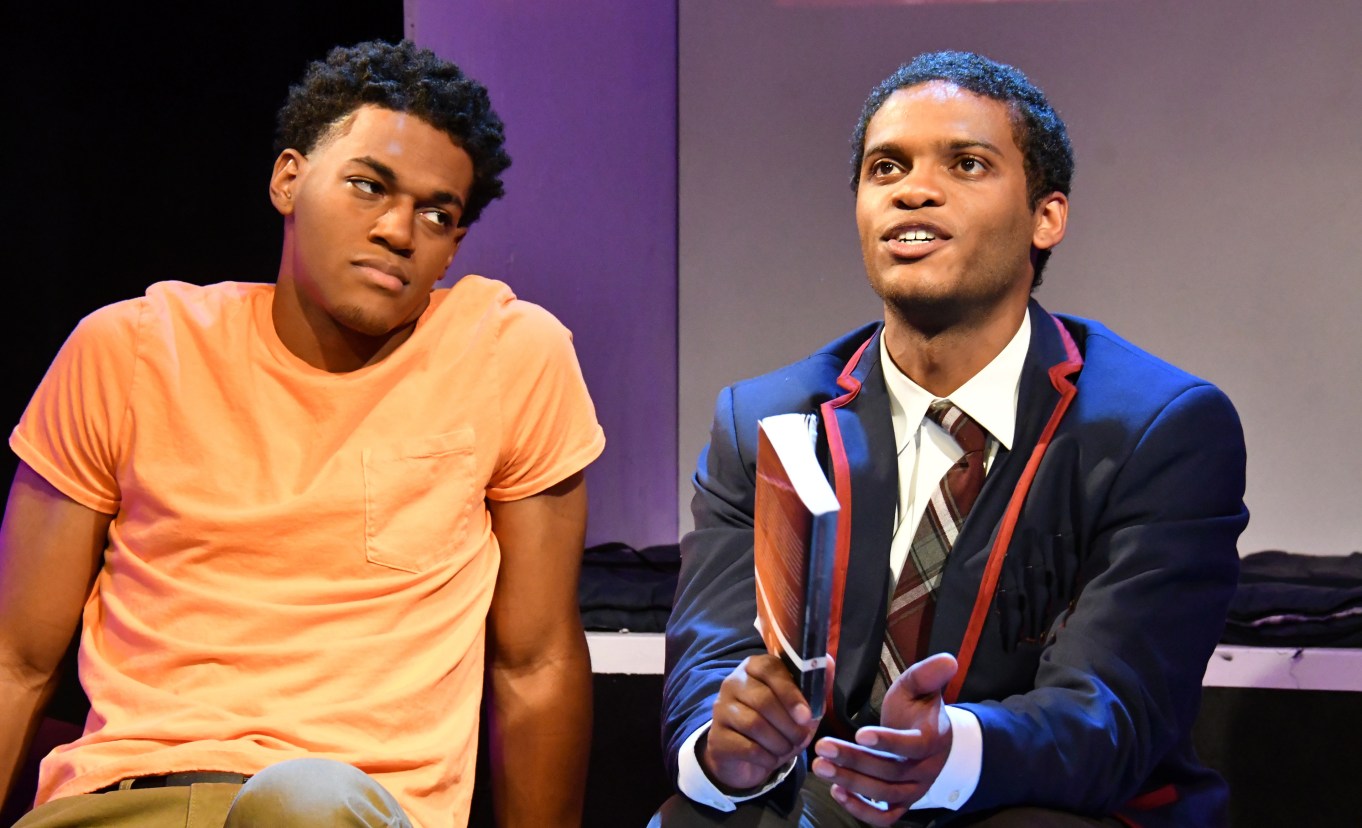 Even before the curtain rises, Officer Borzoi (terrifying BE Rivers) authoritatively points to the word “LAUGH” in lights hanging above the Custom Made Theater’s intimate stage. Swinging a baton, he demands that we laugh when the box lights up—otherwise, he says, we’re racists! Throughout this funny and macabre play, Borzoi’s simple rule proves difficult to follow. Yet, when compared to the contradictions Black people endure every day, Borzoi’s impossible command is obviously a joke.

Adopted as a kid by headstrong white lawyer Debra (bright Jessica Risco), Marquis (amicable Jesse Vaughn) has grown up isolated, as the only Black kid in a white suburb of Baltimore. At his school, exclusive Achievement Heights Preparatory School, all the students wear blue blazers with red piping.  Amidst his white surroundings, Marquis journeys to understand his Black identity.

But Officer Borzoi grabs Marquis. Because Marquis loves white people shit like “Trayvon-ing,” he falls victim to the police. In the school-to-prison pipeline, even privileged Marquis cannot escape the trap set for Black men by American Injustice.

Luckily for Marquis, in jail he meets a woke Black youth named Tru (cool Tre’Vonne Bell) who is obsessed with dogs and aspires to be a vet. Tru comes from inner city Baltimore where danger lurks on every corner. Tru tries to teach Marquis how to be Black, using two surreal tools: first, a sparkling pair of ruby red Jordan sneakers, nicknamed “Dorothys”; and second, Tru’s formidable manuscript entitled, “Hooded, or Being Black for Dummies.” With Tru’s guidance, Marquis slowly comes to terms with his Black identity. But when the manuscript falls into the wrong hands, tragedy invades this coming of age comedy.

In “Hooded,” Playwright Tearrance Arvelle Chisholm furnishes us with a beginner’s guide to Black culture. From Greek gods and pedigreed dogs to The Wizard of Oz and Tupac, Chisholm channels knowledge from a rainbow of memes into Marquis and Tru, showing us the joy and tragedy of being Black in America.

For experts and dummies alike, “Hooded” shares a secret that everyone can learn from. Certainly a must-see.