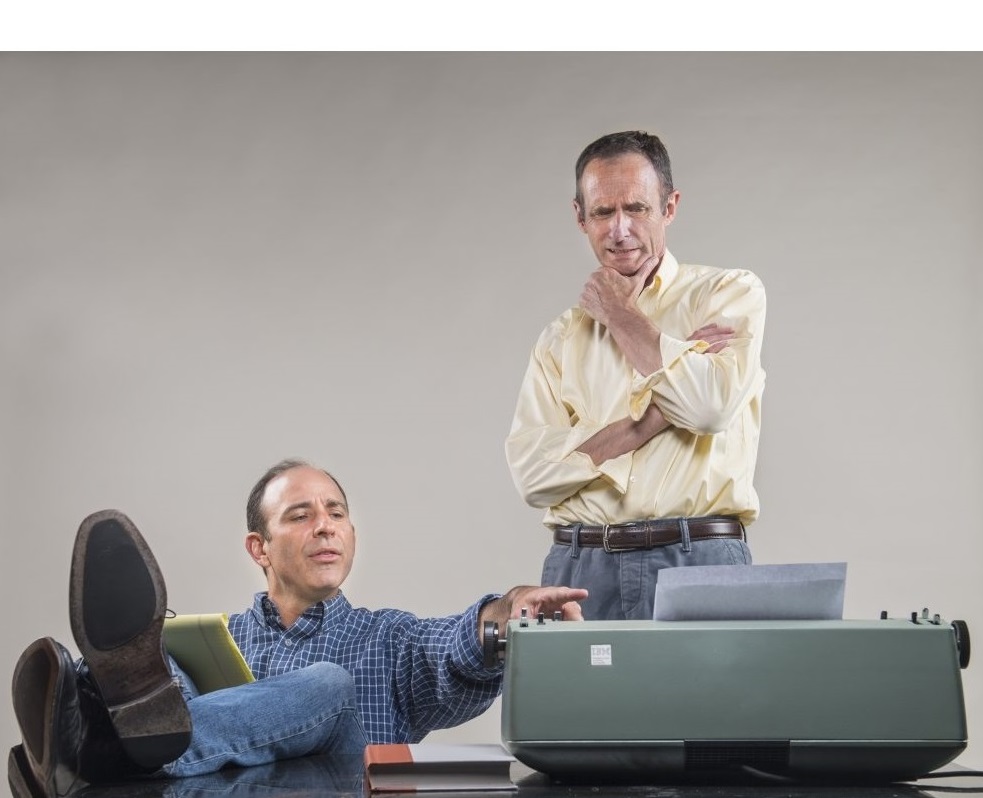 Amos Tversky and Daniel Kahneman, real life scientists, worked at an Israeli University—Amos, a mathematician and Daniel, a psychologist.  Each looks deeply into data and our daily choices. Amos is bubbly, mercurial, and unpredictable. Daniel is careful, strict, and organized. Amos is the optimist, Daniel the pessimist. They meet and help each other see into our future.

Amos (loveable, irrepressible Brian Herndon) is all over the stage, bouncing around like a tennis ball. We love his brilliant insights into numbers and games. But Daniel (meditative, thoughful Jackson Davis) brings him down to earth. At his desk, Daniel mulls over how daily life choices work.

Amos flies high, leaps out of airplanes, and is lionized for his mathematical genius. He uses numbers to figure out what makes people tick—how high or low numbers influence our expectations.  An earthy, jolly, family man, Amos wears his laurels lightly, and doesn’t think about the welfare of his fearful friend.

Amos and Daniel expose the numbers game: how an operation with a 90% success rate seems better than one with a 10% failure rate. They revolutionize mathematics, psychology, and finally, economics. They prove that buyers do not make rational choices, but are manipulated by assaults of data. Amos and Daniel storm the Bastille of the brain.

After Daniel announces he is moving to the U.S., Amos goes along. But cheerful, charming Amos at Palo Alto gets the MacArthur Award, while melancholy, hard-working Daniel is adrift at Vancouver. The world gives the lie to their dream of equality.

Kaufman’s play probes their concord and discord, offering striking glimpses into two minds operating together and apart. These new style thinkers imagine new ways for us to understand ourselves.

When they get back together, it’s a sweet and touching proof of their precarious friendship. Working together on a final grand project, they illuminate their differences and their love.

Every moment of this moving comic drama about two cooperating geniuses grips us as they scribble ideas on the board. They debate new ideas passionately, and compete with other scientists, vividly. The surprising, noble climax opens our hearts and our imaginations.

“Two Minds” displays all the gears at work—we feel Amos and Daniel’s mind whirring. They show us how to make the most of our gifts—by sharing them. They take great steps forward that neither could imagine alone. The Marsh erupts with magnificent brotherly love and discovery.