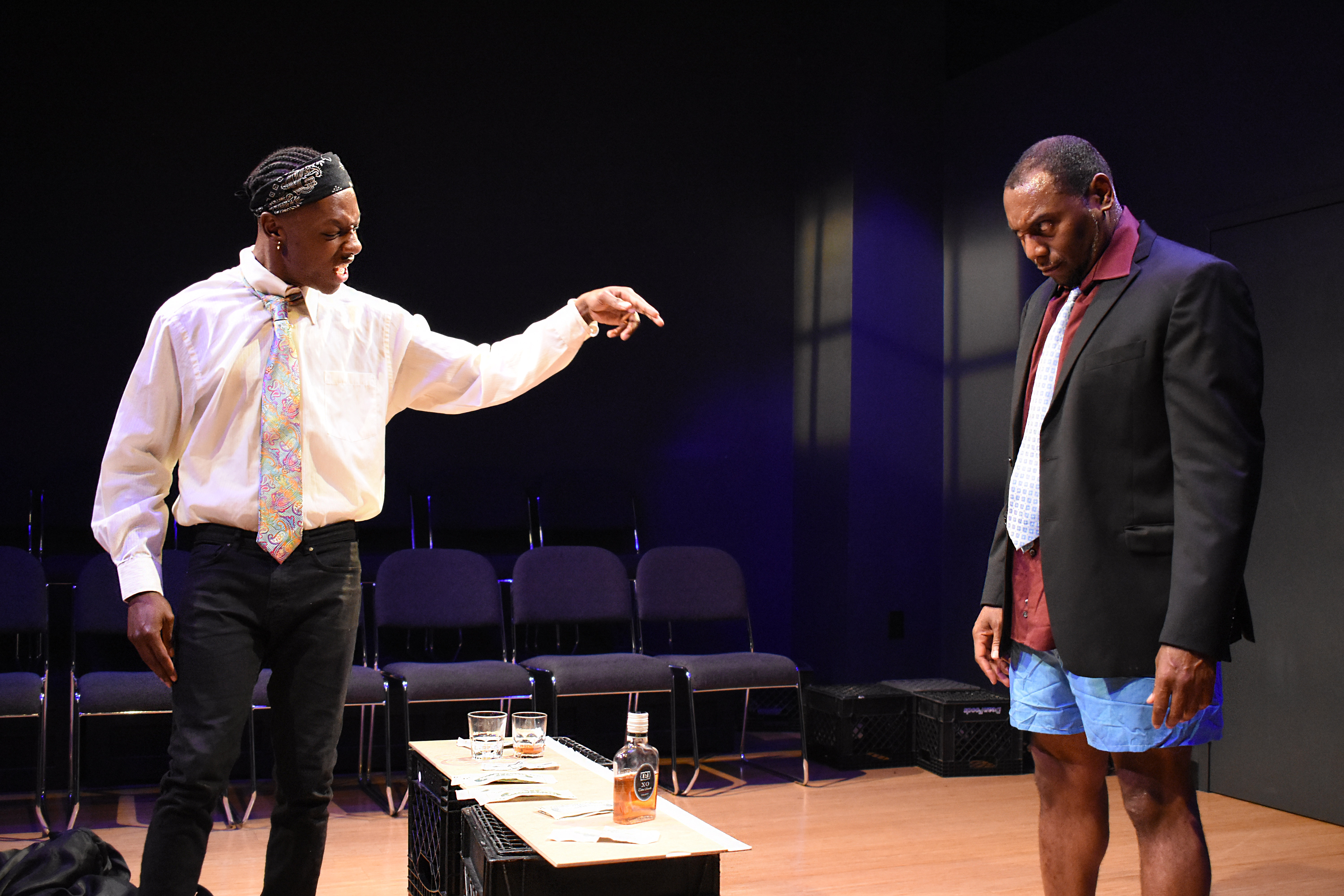 It’s the rhythm, the music in the language, that captures us. A young man piles up milk crates, tops them with flat cardboard, and lays down three slightly bent cards. He picks up one card in one hand and two cards in the other, and throws them down in new positions—all the while chanting.  The rhythmic language of Three Card Monte grabs us:

Playwright Suzan-Lori Parks draws us swiftly into the world of two African American brothers. The older an ex-hustler stuck in a low wage job, and the younger, a wanna-be hustler trying to convince his brother to re-enter the game.

“Topdog/Underdog” shows men posing.  Dorian Lockett as older brother Lincoln, and Michael Curry as younger brother Booth masterfully display their lurking dreams and pain. Beside the rhythmic language, there’s a physical rhythm to match: strutting and threatening stances, a strip tease. Lockett’s Lincoln rivets our attention when he freezes and stares. Curry’s Booth unnerves us with his constant jumping from place to place.

I will ponder ideas in this play for the rest of my life. How drunk must a Black man be to name his sons Lincoln and Booth?  And there’s brother Lincoln’s job at the arcade, where in white face make-up, he poses as President Abe Lincoln at the theater, so customers can pay to sneak up and shoot him. It’s a tribute to Parks’ writing that we accept the fantasy without hesitation.

Lincoln and Booth dream of better futures, but American Dreaming fares poorly for those with no job or in a dead end or temporary job that make hustling look inviting.  Parks’ references to historic, structural racism pop out with the characters’ names and the arcade job.

Their story of a broken family is compelling, brothers out on their own since kids. They fought their way into adulthood, keeping the “child protection bitch” off their backs, finding money for the rent, food, and clothes, somehow.  They become men who cannot trust. “History is time that won’t quit,” Parks said, and she proves it. The men’s fates will be determined by two parallel histories, American and the family.

It’s not a perfect production but it’s damn good and the story remains crucial. Parks won the Pulitzer Prize in 2002 for “Topdog/Underdog,” a play about coming together, about dealing with hard truths that won’t go away,  and it resonates, today.