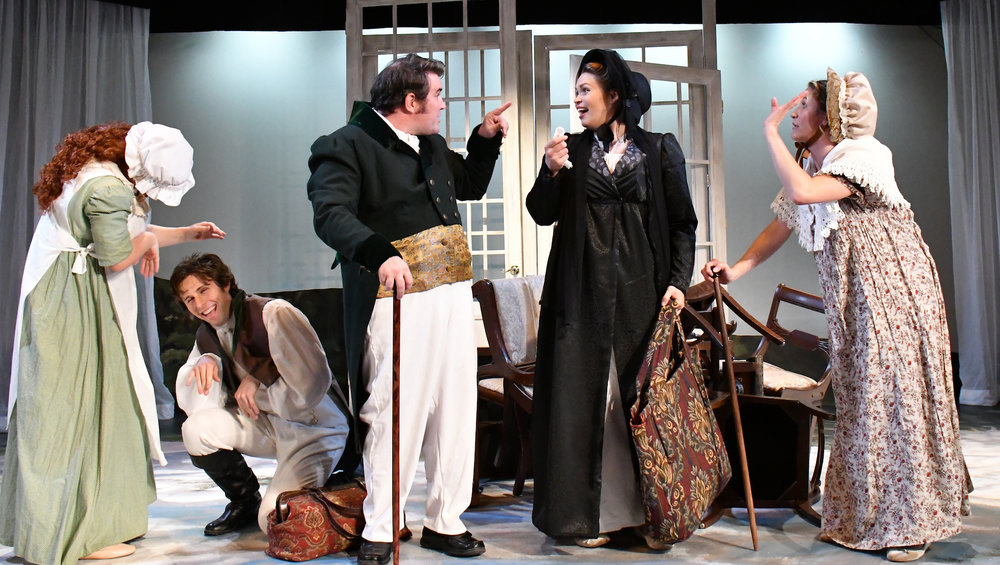 Jane Austen’s charming Dashwood sisters thrive in Town Hall’s  latest production,  “Sense and Sensibility.” Hilarity abounds in Kate Hamill’s award winning 2014 comedy, which Huff Post calls:  “The greatest stage adaptation of this novel in history.” We find ourselves rooting for the Dashwood sisters as they search for love and security in an English romance.

Director Susan E. Evans scores with  this “silly, sad, and sweet” story, winnng enthusiastic applause for its fast but measured pace. “Sense and Sensibility” becomes a ballet of rolling furniture and delightful dance, from the get-go.

Aside from the Dashwood sisters, the cast plays multiple roles, including horses and dogs–and quite convincingly. The antics of the animals are so outrageous, they set the audience howling with laughter. And we enjoy the clever conspiracies of women who are struggling against British male privilege.

Scenic Designer Brian Watson creates a simple yet elegant backdrop, featuring tall, wide French doors for fluid entrances and exits. The actors, themselves, carry on chairs and roll in tables and sofa, to pop in multiple scenes, swiftly and comically. The statue in the fountain amazes and delights us with familiar poses. At the end of each scene, the actors move chairs in and out in elegant, witty choreography.

The cheeky servants serve as Greek Chorus (The Gossips), filling in  details from the novel.  Costume Designer Hope Birdwell shines with her beautiful dresses and elegant suits.  The costumes transport us to 1800 England, exposing the obsessions, schemes, and outrages of the landed gentry.

Even at three hours, I never felt a letdown in my attention. If you are looking for a wonderful night of laughter and fun and even perhaps a bit of tenderness for the lovers, this is the play for you.

In a uncommon move, the roles of Elinor and Marianne Dashwood alternate in successive weeks. The actors are both so excellent, I will return to see them swap roles. Town Hall offers discounts, if you want to return. Given their wonderful talent and acting range, both will be a treat.

“Sense and Sensibility” by Kate Hamill, based on the novel by  Jane Austen, directed by Susan E. Evans, at Town Hall Theatre, Lafayette, California, through Saturday, June 23, 2018. Info: townhalltheatre.com