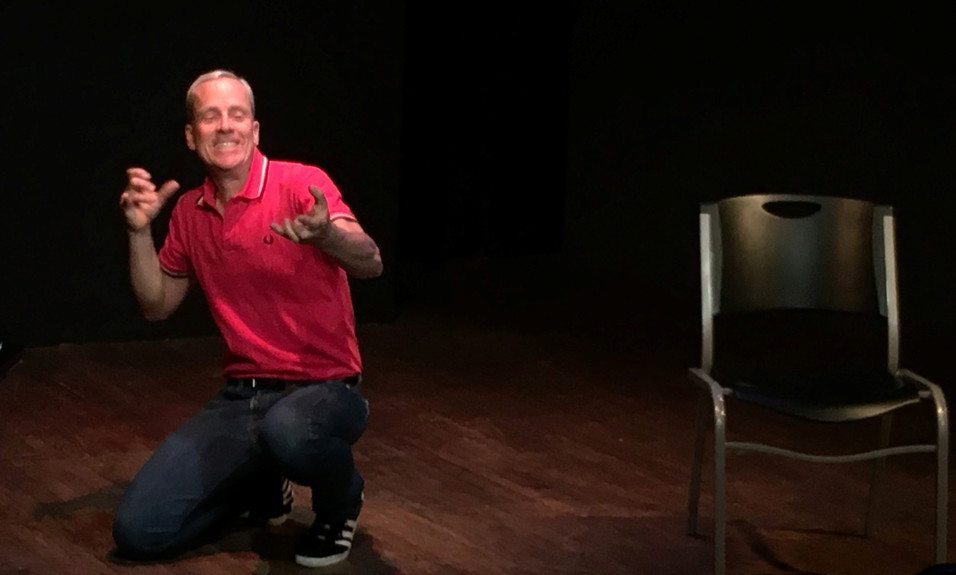 John Fisher is obsessed with WWII. When he was a kid in the Marin suburbs, John Fisher found a way to escape his family’s bigoted outlook. He and his older brother studied the battles of WWII, and played them out in excruciating detail in the woods behind their house.

John’s “A History of WWII” analyzes and illustrates the battles, with more details than I’ve ever heard before. We are enlightened by two points of view: first, a queer suburban WASP boy is captivated by the War. And second, John is mesmerized by Hollywood’s stylish Nazis. After all, as John says, “The Nazis are the best looking and the best dressed.”

A funny yet traumatic event hurts young John; his brother lays the blame on him for eating potato chips in the house. John never forgot this surprising betrayal from his admired older brother.

The odd, queer younger brother uses WWII playtime to bond with his older brother over a common interest. In true WASP fashion, the Fishers ignore the conflict in their backyard. But we are grateful for the comical John who never gave up playing soldier on the stage. What better training for a playwright, actor, and director?

Following his dramatic instincts, young John Fisher watched all the wonderful WWII movies, becoming an expert on each battle.  John tells us about all the handsome Hollywood actors who play Allied commanders. But most of all, young John is turned on by the sharp uniforms of those Nazi officers.

His one man show mingles adolescent longing, isolation, and incredibly detailed reenactments of the famous battles of WWII.

John knows all about the Bangalore Torpedo, the Battle of the Bulge, and that great 50s movie Where Eagles Dare. He weaves us in and out of the Hollywood version and the real history. He asks us to make the machine gun sounds for his reenactments. He rolls on the ground fighting in the Ardennes Forest. He dashes up the steps for the invasion of Omaha Beach. John Fisher goes all in. And his serious older brother is all out.

When the other boys pull a dirty trick on him, John realizes that he is fighting his own war. All the others make fun of him and leave him in the lurch—a queer boy in search of his Corps.

In John’s “History of World War II,” we see the political and the personal at work.

Hollywood made WWII into an idealized political conflict. But John’s play tells a personal story, bringing us WWII through his queer eyes.  With brilliance and astounding talent, John Fisher shows that we live in a state of on-going war.

John’s show is unforgettable, unique, and hilarious. I feel a second viewing coming on. When’s the next performance?

“A History of World War II: The D-Day Invasion to the Fall of Berlin”—written & performed by John Fisher, directed by Jerry Metzker & John Fisher, at The Marsh, San Francisco, through Saturday, March 9, 2019. Info: themarsh.org