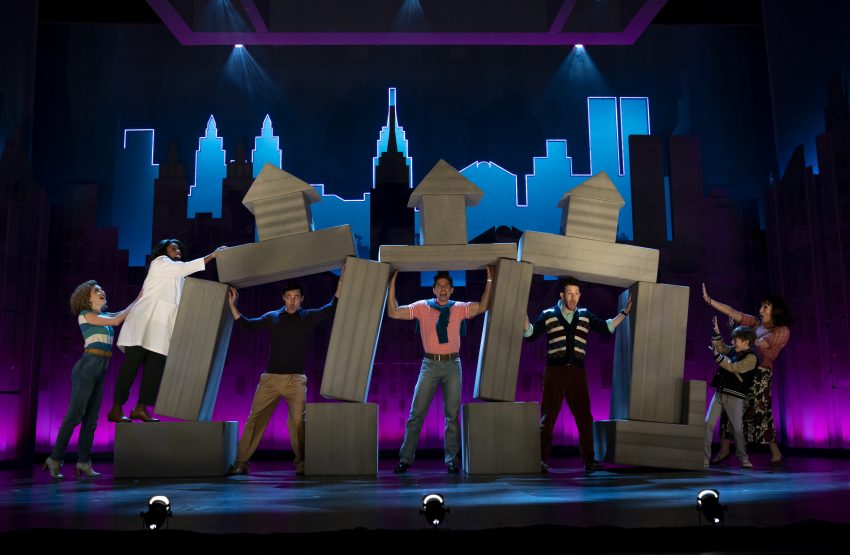 As they evolve, we realize that both gay and straight couples were forced to live false lives—at a high emotional pitch. The comic and touching songs fill the show with joy: the opener “Four Jews in a Room Bitching”; the gay love song “Thrill of First Love”; the hilarious “March of the Falsettos,” and many more. It’s Seinfeld set to unforgettable music.

Trina is bitter, Marvin is confused, and they must confront their firecracker 12-year-old son Jason (Thatcher Jacobs). The bright New York City kid rejects his divorced parents—but he takes a liking to Marvin’s lover Whizzer. When they all sing, “Everyone Tells Jason to See a Psychiatrist,” the house rocks with laughter.

But Mendel develops a crush on Trina, and shamelessly sings, “Does she sleep in the nude?” endearing in his innocence. Gay or straight, secrets tumble out in rule-breaking and unique songs and dances.

Marvin continuously moves the pieces of his family, friends, and lovers to protect himself. He wants Whizzer to act like a conventional housewife—but that won’t happen!

Trina’s song “I’m Breaking Down” pays brilliant tribute to neurotic urges just below the veneer of conformity. In the kitchen, Espinosa depicts an insulted woman chopping carrots and bananas. We laugh out loud as she slices up phallic objects with gusto.

We love the paradoxical wit of family and friends who break down the rigid rules of 80s Reagan America. You will love the generous “Lesbians Next Door”: Dr. Charlotte (elegant Bryonha Marie Parham) and Cordelia (graceful Audrey Cardwell). They bring joy to the shattered family—in the midst of the AIDS crisis, which Reagan spent years denying.

Through their struggles, Marvin and Whizzer become more than lovers. When sickness strikes, their love shines with moving lyrics: “Who would I be without you?” “Falsettos” explains the power of love to transcend rejection with “Welcome to Falsettoland.”

We get a picture of what life can be like if we focus on each other, if we give up falsetto and reveal ourselves–women, men, children alike. These brilliant rejected people have done it—why not us? A show that inspires as it makes us laugh.