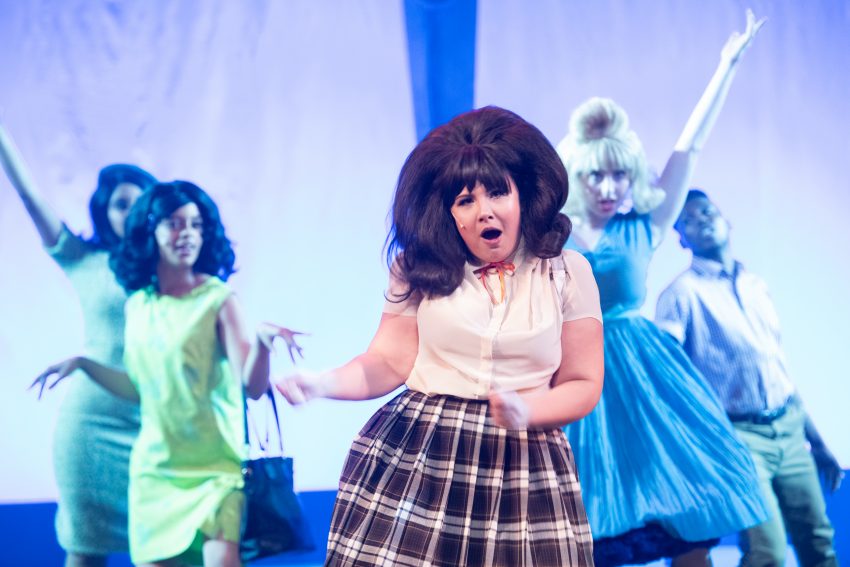 Baltimore teen Tracy Turnblad (Cassie Grilley) causes ripples with her big hair and funky dance moves. Grilley amazes us with vocals that fill up the historic Victoria Theatre. From the moment we first see her, she feels like an old friend.

By no means a typical “It” girl, plus- sized Tracy’s hair-do violates 60s dress codes. Constantly in trouble with her principal, she is banished to detention with “slow kids,” all Black students, of course.

Tracy dreams of dancing on “The Corny Collins Show” with her nerdy, pig-tailed friend Penny Pingleton (Melissa Momboisse). They play hooky to audition against her mother’s orders. Scott DiLorenzo plays her Mom, in a hilarious drag role, fearing that Tracy will be bullied for her size.

But ground-breaking Tracy conspires to integrate White and “Negro” nights on the popular show, against the threat of authorities. She believes it’s the right thing to do.

In this nightly show, only white teens are allowed on the dance floor. Black teens are prohibited from dancing with Whites! And Black teens are pigeon-holed to a once-a-week “Negro Night”! Yes, believe it–that was the 50s, early 60s, yes.

Tracy discovers that being overweight is not the only thing that keeps a teenage girl on the outskirts. She realizes that Black teens face even greater prejudice. When Tracy meets Seaweed (Dave Abrams), a “Negro Night” performer, they become instant friends. Seawood does amazing back flips, leaps high, and cheekily flashes a condom.

I’ve never had to cool myself off with a program before. Tracy’s friend Penny violates racial rules by falling for sexy Seaweed; the chemistry between them is electric. Ever since, I’ve been wishing I was in her place.

“Hairspray” shows us how to break traditions, drop prejudices, and work together for the common good. We don’t need superheroes to make changes: We can just imitate terrific Tracy Turnblad.