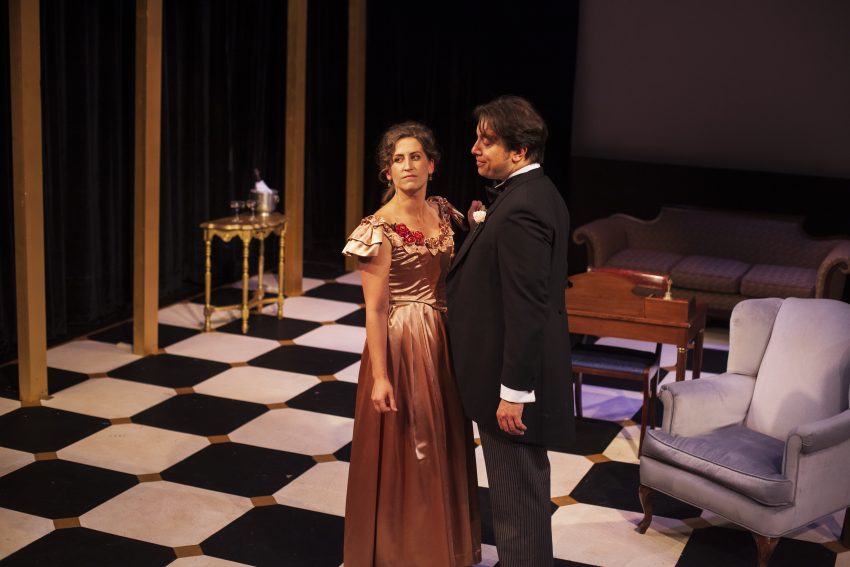 It’s London in 1895: Love and politics are everywhere, including cocktail parties where political golden boy Sir Robert Chiltern (Daniel Zafer-Joyce) is the shining light of high-brow government circles. Robert provides honesty and stability for his wife, and his party’s politicians. Although he sets a high moral tone, Robert isn’t as saintly as he seems.

Like a Mafia mobster, Sir Robert made his fortune by selling a major government secret to the highest bidder. All is good and dandy, but Robert is married to the most pious woman in London. His Lady Chiltern (Ellen Dunphy) has a deep voice and straightedge personality that make her quite a bore.

Lady Chiltern is the perfect wife, but she lacks dimension, and comes across as a teacher’s pet. She puts Robert on a pedestal, publicly proud of his perfection.

But Robert’s past returns, as the gorgeously dressed Mrs. Cheveley. Gossips say that Mrs. Cheveley performs like “a genius in the day and a beauty at night.” I agree—she is wit, beauty and darkness wrapped neatly in red chiffon and lace. A schoolgirl nemesis of Lady Chiltern and ex-fiancee of Lord Goring, Cheveley is a dark angel who tantalizes and blackmails Robert into a get-rich-quick scheme. Sounds familiar, doesn’t it? Trump, anyone?

At the bidding of Mrs. Cheveley, Lord Goring (hilarious Aaron Weisbeg) and Sir Robert commit any crime to stay on top. Ironically, at first, Lord Goring seems to be a bachelor with a questionable character. But only he consistently speaks the truth and he is the only person willing to sacrifice his own wants and needs.

If anyone would make an ideal husband, it would most likely be the despised Lord Goring.

“An Ideal Husband” tells a morality tale about greed and intolerance. Oscar Wilde shows us selling our citizens for profit. It’s what they do in a selfish PAY to PLAY politics.

Only the rich can afford to BUY those offices, supported by corrupt corporate donors. Even our universities and hospitals have sold out to the highest bidder. Why do you have to be a zillionaire to run for office?

“An Ideal Husband” questions why we value money, fame, and power, so highly. Lady Chiltern can be “morally firm” because she comes from a smug, privileged class. In contrast, Mrs. Cheveley, a perverse anti-hero, sweeps in with a siren song. She represents our desire for instant wealth and power.

So, the witty Wilde world rolls on—accepting the clever crooks and rejecting the honest souls among us. As always, Wilde gives us the witty satire of aristocratic bunglers and thieves who run the show.