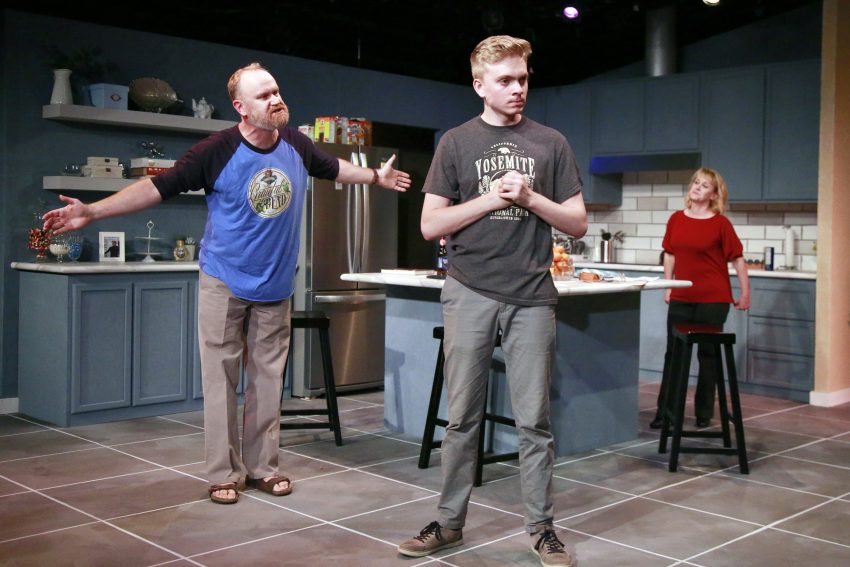 At Los Altos Stage Company there’s a surprise waiting for you. A spectacular production of “Admissions” by Joshua Harmon, directed by Gary Landis, featuring five actors in top-notch comedic form. I admit—“Admissions” is the best play I’ve seen in a long time–and they have a perfect on-stage kitchen, too.

The show features a breakthrough performance by seventeen-year-old Quincy Shaindlin, who plays Charlie Luther Mason, a bright graduating senior at exclusive Hillcrest Prep in New Hampshire. Shaindlin has a seventeen-minute rant as Charlie that puts him on the map as a leading actor. Shaindlin’s character and comedic talents are superb.

And that’s not all. Kristin Walter and Michael Champlin play his parents, with verve and wit. Sherri and Bill Mason are the Admissions Officer and Headmaster at posh Hillcrest. Both are clever liberal thinkers who are striving to get students of color into the mostly white school. Kristin and Michael do a great job playing two smart, up-to-date academics; they bring down the house with their lovable, precise pacing, postures, and contradictions.

And wouldn’t you know it—graduating senior Charlie, their adored son, all primed to get into Yale, has their number. Don’t kids just know the vulnerabilities and virtues of their parents? Charlie knows the territory well—he knows his school, he knows the competitive system—it’s failings and achievements. And he knows what affirmative action means to students whom his mom and dad are trying to get into Hillcrest. Charlie is sympathetic and thoughtful, hitting satirical highlights time and again.

The opening scene in Sherri’s dark, wood-paneled admissions office, where she confronts Roberta (delightful Judith Miller), an old time teacher. The scene lets us know that this will be an evening of comedy and belly laughs—with a meaningful ideas and actions already rising to the surface. Sherri and Roberta tussle hilariously over an admissions brochure, counting the number of black vs. white faces in the photos.

Judith Miller tickles our funny bone with her witty remarks invoking the school’s noble history. She pops up and down from her seat in Sherri’s office like she’s going to explode—a comic delight! Even her tee-shirt is hilarious.

You have to sympathize with hard-working Bill and Sherri, who struggle to “do the right thing.” Especially when their dear friend Ginnie Peters (spot-on Marjorie Hazeltine), tossing her flaming red hair, feels insulted by accusations over “merit.” Outrage reigns, friendship breaks, and everyone is pissed. Who is right?

Here’s a comic masterpiece that raises serious issues, using both comedy and drama. “Admissions” surprises and astounds—and the climax comes out of the blue. All I will tell you is that it’s the son, Charlie, as interpreted by budding star Quincy Shaindlin, who comes up with profound and honest answers. Like our climate hero Greta Thunberg, Charlie puts himself on the gears of the elite academic machine, and stops it all.

Harmon’s “Admissions” lays out the boundaries between well-meaning liberals and the elite schools. Is “private” really better than “public,” or is that yet another myth that is going down in flames. According to the news stories about privileged parents buying their kids’ way into so-called “elite” schools, maybe that lie is finally being exploded.

You can find out all about it, and laugh the whole time at the brilliantly directed, designed, and acted “Admissions” at Los Altos Stage Company. It’s a better education than Yale.