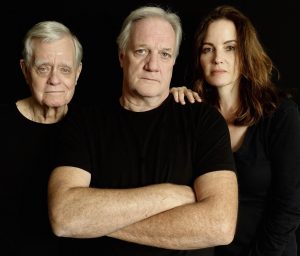 Irish playwright Brian Friel focuses on a wandering “faith healer,” his wife, and his manager, using a lyrical style that rivets us to their conflicting monologues. They each speak with the conviction that one person’s memory can provide us with the “real truth.”

The three actors portray these complex characters brilliantly. “Faith Healer” hits wonderful clashing Celtic chords, and embodies, in Frank, the rich Irish soul in its ambiguity. We are left wondering what madness and mystery these deluded charlatans represent.

Some say Frank is a charlatan, but Phillips presents a seer, who follows his gift. He asserts: “Not that I was doing good, but because in those few hours, giving relief and spreading joy, I became whole in myself, perfect in myself.” Christian Phillips draws us into Frank’s essence, the power that compels Gracie and Teddy to follow him until one terrible night in Ireland.

In Gracie’s monologue, she sits alone knitting, sipping whiskey, expounding her love for Frank—even though “He obliterated me before every performance.”  As Gracie, Rachel Klyce absorbs us in her despair. She is hooked on her own moody version of Frank.

Frank and Gracie’s bond seems as fragile as the wooden signs on their babies’ graves. Yet, in an intense reversal, she yells with pride: “When he came up before those people, the master appeared!” She shares that dreadful night with us, after Frank heals ten people.

When we meet Teddy (Keith Phillips), the charismatic, beleaguered manager of the “Association of the Spiritual,” he talks about booking an act with a whippet playing the bagpipes. Teddy, the English showman, peddles vaudeville oddities to the masses, worthy of a low-rent roustabout.

In the face of disaster, Teddy describes a version of Gracie who craves devotion. Keith Phillips poignantly portrays Teddy’s angst about managing Frank. He hopelessly loves “beautiful” Gracie, whom Frank often abandons.  Self-pitying Teddy claims, “I suffered as much as she did,” when he identifies her dead body.

We feel for Teddy, in Keith Phillips’ rich portrayal of his shifting character. Teddy’s story is the most compelling. His version of the tragic night veers from Frank and Gracie’s, adding mystery to their memories.

Frank returns for a final monologue, describing visions of shovels, picks, and axes in the back of a truck. In a trance, he reveals that the villagers expect him to heal yet another person in a wheelchair. Friel shows us three people through each other’s eyes and perverse perceptions. The final pieces of the puzzle remain unplaced.

Frank once said about his spiritual experience, it’s either “momentous or absurd.” “Faith Healer” is wonderfully both. Through “Faith Healer,” I am reminded of the fragility of relationships, and how quickly our feelings can change, especially about an elusive, chameleon-like leader.