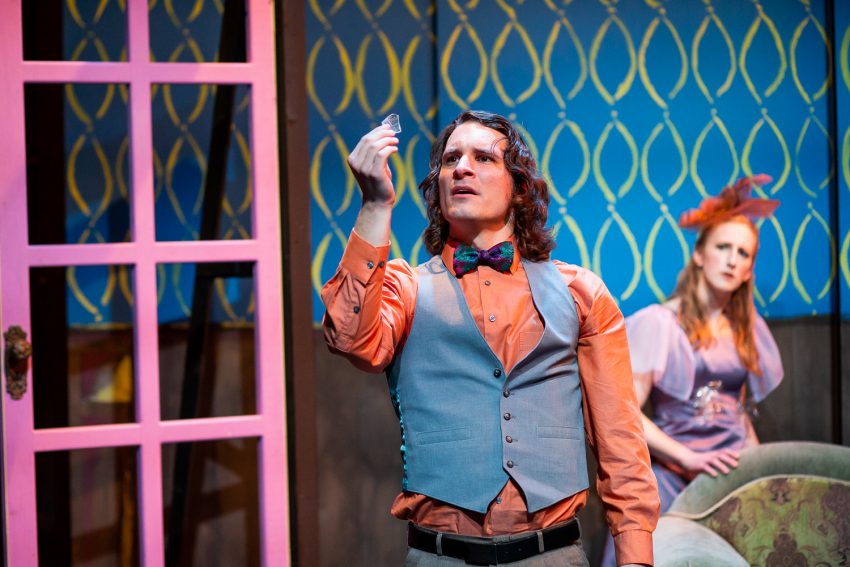 We live in a world of social media where reality and fantasy mingle—constant companions.  In “An Invitation Out: A Neo-Victorian Virtual Reality Comedy,” sci-fi playwright Shualee Cook takes us into a chatroom where sharp insights and wicked dialogue prove that we have been taken over by social media. We are living “virtual” lives on our computers.

Quantum Dragon’s delightful sci-fantasy evokes gender issues that make us questions our own sense of reality.

The chatroom, a Mad Hatter costume party, reminds me of The Matrix or Avatar: an action-packed made-up world. It’s a humorous condemnation of our fantasy-based lives, using wit worthy of Oscar Wilde.

Only in the closing minutes does Cook’s play take a dark turn as Wridget (handsome, confused Will Livingston) confesses his insecurity and unhappiness. Wridget realizes how little control we have over how others perceive us. He sees  that, from birth, gender roles control us and we become mere avatars of our real selves.

Wridget becomes envious of his sister ButtercupEGL (versatile Caitlin Evenson) and her husband FlyByNightSOA (bombastic James Aaron Oh), because they have unplugged. They conspire to have a baby called Harmony. Yet they debate the advantages of living in virtual reality, after having great sex on the floor.

As they cuddle post coitus, ButtercupEGL suggests they unplug; but FlyByNightSOA reminds her he’s not as virile in the real world, and the sex is not as good. ButtercupEGL assures him that she enjoys the messiness of reality.

Imperfect as it is, Wridget wants that reality as well, courting his avatar Flutterbye99 (sparkling Isabel Langen). But they quickly disagree because she prefers to stay in the chatroom, never growing old—even if it means never having kids.

Wridget’s outrageous aunt, Scandalicious (vibrant Caroline Portante) also opposes his leaving the chatroom for love. Wridget begins to doubt his decision, distracted by the “outworlder” Raskin (enigmatic, expressive Regina Leon) who intrudes on his virtual world. “An Invitation Out” makes the conflict between games and love both intimate and intense.

Wridget’s chatroom, like the virtual realities we create on Facebook and Instagram, allows him to construct an alternate universe. Surrounded by an unlikely group of avatars who change genders as easily as they change costumes.

Wridget’s chatroom life spins out of control—he held on too tightly. “An Invitation Out” is packed with wit, comedy, and invention—so it takes a lot of guts to accept that fresh and messy world outside. Don’t miss it.