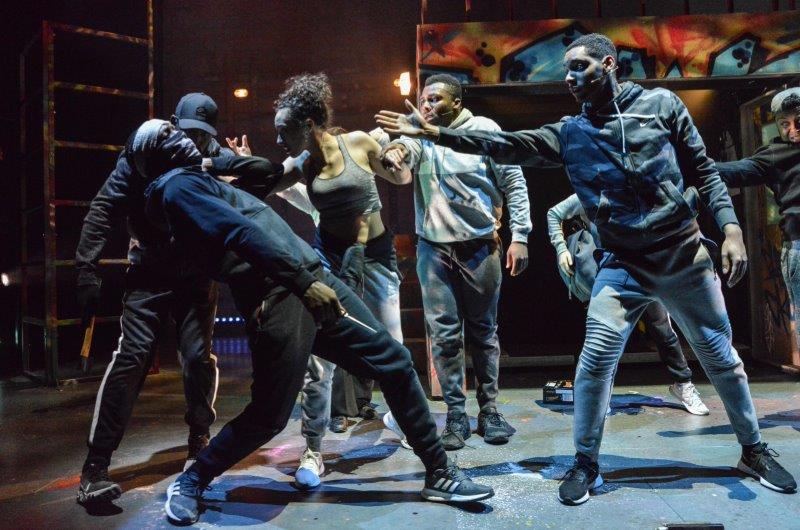 Alex Wheatle’s award-winning young adult novel, turned into a play by Emteaz Hussain, draws us into the lives of six multicultural teens who introduce themselves by rapping: “We are the Magnificent Six.”

In “Crongton Knights,” the conflict centers around survival and poverty, and the formation of gangs for protection. Even with a thin plot, the diverse, enthusiastic teen characters are full and rich, with high stakes for each.

Lonely McKay Tambo (remarkable Olisa Odele) expresses himself with unique songs and dances. He hopes to become a chef, as he grieves his recently deceased Mom by cooking her recipes.

His restless older brother Nesta (Dale Mathurin) rides drives around the streets looking for trouble. He finds it when he crosses into the Major Worries gang turf.

Soft-spoken singer/dancer Venetia (talented Aimee Powell) pleads with her friends to help her get her phone back. Her ex-boyfriend, bullying Sergio (versatile Simi Egbejumi-David) has stolen her phone with embarrassing sexual photos. In dismay, she sings a lovely ballad: “He made me believe there was a happy-ever-after.” We can all empathize with her from our own wayward teen years.

The group embarks on Venetia’s quest, a heroic journey to preserve her reputation. But they meet up with violence and racism as they cross rival gang territory.

In 2011, riots raged in Manchester, Birmingham, and London against the government and police brutality. Poor people battled against racial discrimination, economic decline, and widespread unemployment, as we do now.

“Crongton Knights” reflects the discontent when the Knights board a bus during the uprising. They rap and sing, “Is it a riot?” And they watch stores being looted. They wonder if they should jump off the bus and join the action. V’s friend and protector Bit (solemn Zak Douglas) resists the gang warfare, even while hiding a gun.

Fast-talking Turkish refugee Saira (expressive Nigar Yeva) touchingly recounts her family’s escape from Turkey. In Syria, where she also faced gang warfare: “We had them too, G men, … gangs.” She has not escaped the threats, even in England.

They confront an angry and jealous Sergio, and wild fights break out.  We feel their fear, as they form their own protective gang, “The Magnificent Six.” Their comaradery will inspire teen viewers.

They later meet up with violent gangster, Festus who is hunting McKay’s brother. The fight ends with indecisive Jonah (Khai Shaw) on the ground crying, and McKay singing, “Never meant to go this far.”

We feel part of the Knights, as they grow from a small, naïve clan to a close-knit family of friends. The gifted ensemble, including the crazy, wealthy Bushy (dynamic Kate Donnachie), shares the truths of a threatening teen world, their isolation and rejection, and their driving need for belonging.