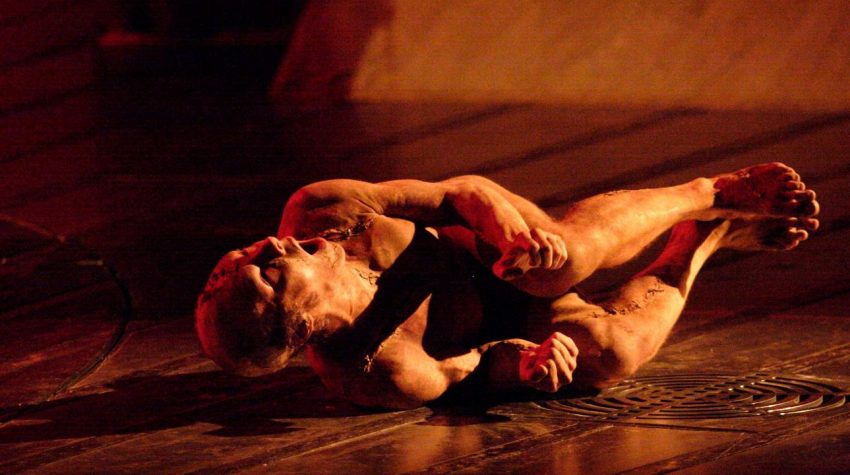 Watching “Frankenstein” in 2020, I see Mark Zuckerberg, Jack Dorsey, Jeff Bezos—all the reckless men who watch idly as their creations become symbols for humanity’s worst impulses. Like Victor Frankenstein, these “geniuses” are obsessed with themselves and refuse to take responsibility for the fallout of their monsters.

At the National Theatre in London, playwright Nick Dear and Oscar winning director Danny Boyle explore innocence and corruption in their breathtaking “Frankenstein”—featuring Benedict Cumberbatch and Jonny Lee Miller alternating roles as the Doctor and the Creature. Lovers of Mary Shelley’s novel will be thrilled, and millennials will discover why this 200-year-old tale still fascinates us.

Overhead, a network of filaments glow and fade, like neurons reacting to the action onstage. A fleshy, alien membrane, stands in the center of the enormous stage. Suddenly, a palm presses out from the inside and we realize in horror that it’s a disembodied womb.

“Frankenstein” captures us immediately, as we watch The Creature (phenomenal Benedict Cumberbatch) being born. Slowly, achingly, the Creature crawls over the vast, threatening stage, teaching itself to walk. He achieves the clumsy gait of a toddler. Director Danny Boyle expertly plays with our senses of revulsion and curiosity—we are undeniably disturbed watching a mostly naked, grown man flail and moan like an infant, but there is beauty in The Creature’s innocence.

We marvel as Cumberbatch’s verbal and physical articulation become slowly more sophisticated. Despite efforts to find acceptance from a blind peasant (delightful Karl Johnson), he is continually rejected. As The Creature becomes disillusioned with humanity, our initial disgust turns toward sympathy—a brilliant stroke by playwright Dear.

When we finally meet Victor Frankenstein (commanding Jonny Lee Miller), we’re also inclined to hate the heartless inventor. As Dr. Frankenstein, Miller embodies the loner, mad genius who looks down on common folk. We are equally terrified by The Creature’s vengeful outbursts as by the Doctor’s amoral ambition.

In her novel, Mary Shelley asserts that man should not play God. In the play, Nick Dear assumes that Man will play God, and asks what responsibility we take for our creations.

Are the things we create inherently corrupt or do we corrupt them? It’s nature vs. nurture but with monsters, and holy hell I just realized that Jurassic Park is Frankenstein with dinosaurs!

Famously, Zuckerberg’s first motto was “Move fast and break things.” Victor Frankenstein would be a fan. In the National Theatre’s vast and spectacular staging, we must decide who deserves our pity. Who is the true monster?

Danny Boyle’s triumphant “Frankenstein” distracts us from our current viral terrors to remind us that we are plenty capable of creating our own.

“Frankenstein” by Nick Dear, adapted from Frankenstein by Mary Shelley, directed by Danny Boyle, at the National Theatre, London, streaming free through Friday, May 8, 2020. Info: nationaltheatre.org

Cumberbatch and Miller alternate the roles of Creature and Doctor through May 8.