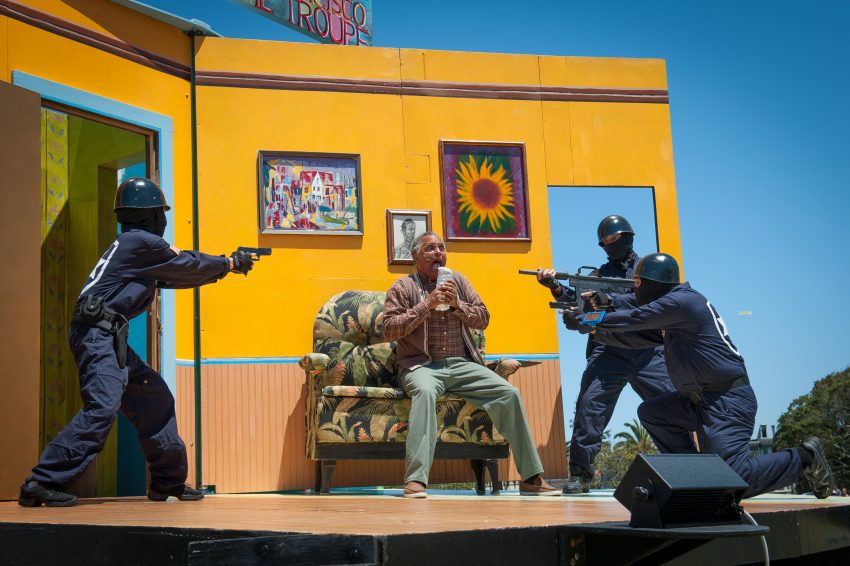 In 2015, the San Francisco Mime Troupe celebrated its 56th Season offering Free Agit-Prop political theater all summer long.  On Independence Day Weekend, they knocked it out of Dolores Park for hundreds of happy, laughing picnickers. Now, the Mime Troupe is bringing their award-winning, issue-bending comedy to your small screen.

We see daily reality from the point of view of the poor and the dispossessed. Rather than “Lives of the Rich and Famous,” we see the horror and comedy of Mission life.

Their comic, agit-prop street theater shows what’s happening in the gentrifying city. We can rock out to the antics of four actors playing multiple roles, using cartoon cut-outs for scenery, and singing Ira Marlowe’s political songs. The Mime Troupe brings us the City on steroids, with Progressive political jokes, ridiculous police break-ins, and the biting connection between endless Middle Eastern Wars and Mission District Wars.

Enjoy the high-powered, tightly wound antics of our one of a kind revolutionary theater troupe. It’s 99 cents, it’s fun, and the S.F. Mime Troupe is unique and fun for the kids, too.

The Tony Award winning SF Mime Troupe has a motto they stick with: “Outspoken, Never Silent.”

Here we see a phony drug war, and a family torn apart when the grandfather, Malcolm (Michael Gene Sullivan) tries to save his nephew Lluis (George P. Scott). Lluis has come back from Afghanistan and joined the SF Police Force. But despite the help of a local girl who has become an idealistic cop, Emily Militis (Lisa Hori-Garcia), he struggles to reconcile police oppression with his love for his family in the hood.

Hugo E Carbajal plays the clever, pinochle playing cop-diverting neighbor. “Freedomland” makes the crucial link between war abroad ars and the war at home. The Mime Troupe has been connecting the dots since the Vietnam War!

Folks in the Park jump up from their picnics on the grass and applaud with gusto. Folks of all ages and kinds—the old-time Bay Area audience, thrilled to see the Mime Troupe, again. “Freedomland” never gives up. 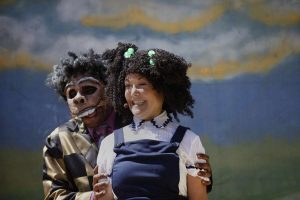