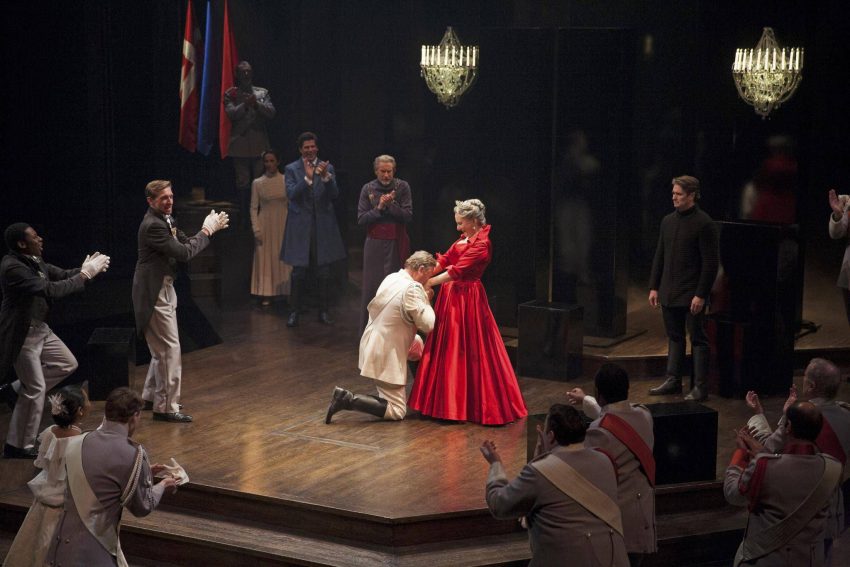 The Stratford Festival of Canada brings us an innovative “Hamlet” that flips the play’s essentials.  Claudius, the repentant murderer, evokes our sympathy; while Hamlet, his ambitious heir, startles with his vengefulness, as a slew of courtiers are mangled by their conflict. The Stratford “Hamlet” shines with freshness and truth—even on the small screen.

As Claudius, the King, Geraint Wyn Davies brings emotional depth to his role. He exhibits a deep remorse for his crimes from the start, which contrasts with his unshakable determination to hold onto the throne. Davies comes off as stern, but troubled; strong-willed, but fragile.

Davies’ performance is most moving in the King’s monologue after he watches Hamlet’s play within the play, “The Murder of Gonzago.” Claudius asks, “May one be pardoned and retain th’offense?” With this unanswered riddle, the King condemns himself to a lifetime of penance.

An elegant church proves to be a most excellent setting for the play’s tragic culmination. Two baroque chandeliers hang overhead, forming a creepy contrast with the church’s dark mahogany floors. By setting the scene here, Director Antoni Cimolino brings a sense of menace to Hamlet and Laertes’ clash in the play’s grand crescendo. The religious setting is deeply unsettling, and sets the mood for dark events.

Adrienne Gould’s Ophelia plunges into a madness both saddening and sympathetic–she grips our attention with her woeful singing and refuses to let go. When Polonius, her father, dies, Ophelia sings tearfully, though her face suggests bliss. The shakiness in her voice and the exuberance of her nonsensical song make her performance exquisitely memorable.

Jonathan Goad’s Hamlet comes off as devilishly clever and sadistic. This Hamlet is no hero. His desire for vengeance is rightly placed, but his methods are detestable, bringing pain to his family and court. He brilliantly exhibits sanity and madness mingled, while the faint line between them begs the question of Hamlet’s madness.

Hamlet is referred to by his peers as “mad” because his actions seem to have no rational purpose. His words have no comprehensible meaning to the other characters onstage. But Goad lets us know Hamlet’s motivations—making these contradictions clear to us, in the audience.

Yet, Hamlet acts erratically, with harsh emotional swings, and an intense high after disrupting the King’s court. His “play within the play” puts truth in front of power—a dramatic impeachment scene we all long to see.

Would it be justified to call this Hamlet mad? Goad puts the “madness” question front and center through his expert portrayal of Hamlet’s strong emotions:  sadness over his father’s death, and euphoria in proving his suspicions of Claudius.

Director Cimolino throws caution to the wind—this Hamlet is obsessed, this Claudius cruel—embroiled in a sado-masochistic struggle. The current Stratford “Hamlet” details a cruel King fallen from power for the heinousness of his crimes. Seems fitting for the tyrannical times we’re living. I found this production of “Hamlet” moving, personal, and political, all at once. Highly recommended.