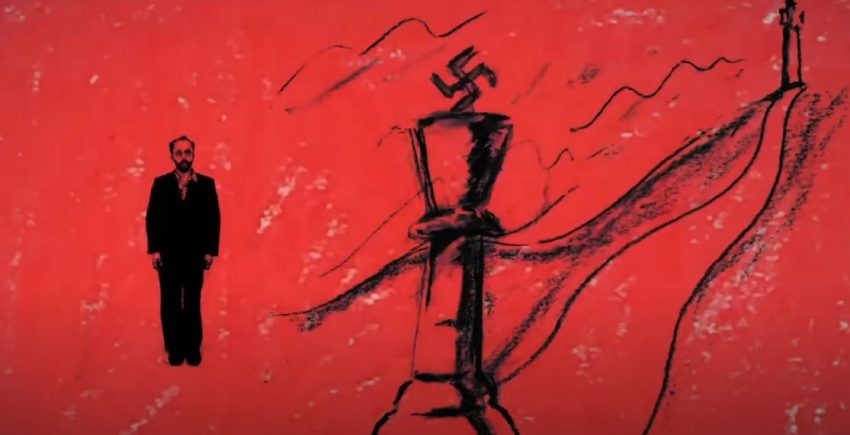 Not a lot of good has come out of 2020. Even the most privileged, most content, most well-adjusted of us seem to be struggling to find any light. But last week, I witnessed a marvelous source of resilience for the dark times we’re living through.

Joshua William Gelb and the talented artists of Theater in Quarantine bring us an exceptional live theater experience that we can enjoy while sheltering in place. Theater in Quarantine brilliantly combines live theater, drawings, computer graphics, and music to tell a complicated, intense tale. Director Jonathan Levin connects these four elements into a unique work with surgical precision.

TiQ’s “Footnote for the End of Time” is a retelling of Jorge Luis Borges’ classic short story “The Secret Miracle.” The story involves Jaromir Hladik, a Jewish playwright who is sentenced to death during the Nazi occupation of Prague. While standing in front of the firing squad, Hladik prays to God for more time to allow him to finish his current play. Through Borges’ mystical realism, time freezes just before the Gestapo carries out the murder, giving the writer one year to finish his play, if only in his mind.

As Hladik, Gelb stands against a white backdrop, narrating the chilling story while Jesse Gelaznik’s haunting illustrations fill the space, creating the scenes from Borges’ story. Gelaznik’s medium is black charcoal, intense, unfolding in liquid, graphic images. Scenes are drawn, then erased to mimic the story in Hladik’s mind.

As a further dimension, computer graphics are incorporated to create multiple images of Hladik, which allow him to gyrate around the screen.

Gelb cleverly chooses to reinterpret Borges’ language, transforming it from its original prose into poetry, enhancing  the transcendent quality of the performance. However, the real glue of this work is Alex Westin’s music, inspired by Olivier Messiaen’s “Quartet for the End of Time,” composed in a Nazi POW camp.

Gelb’s Theater in Quarantine is an inventive stroke of genius—a theater “laboratory” that he has created out of a 4x8x2’ closet in his Lower East Side Manhattan apartment. The closet turned white space forms his stage, allowing him to self-distance, while still collaborating with other artists. TiQ makes a transformative live theater event that we can consume via live streaming on YouTube—and no one breaches the 6-foot rule!

As much as I love “Footnote,” other reviewers found it lacking Borges’ intensity, suggesting that multi-media effects distract us.  If you are a Borges’ devotee, the switch from prose to poetry may be a bridge too far.

But Jorge Luis Borges, himself, was a fan of free verse, complicated metrical innovations, and daring imagery and symbolism, replacing traditional form.  “Footnote for the End of Time” is all that and more, and Borges just may have loved it as much as I do.

“Footnotes for the End of Time” –text by Joshua William Gelb, based on Jorge Luis Borges’ “The Secret Miracle,” directed by Jonathan Levin, by Theater in Quarantine, music by Alex Weston, movement by Katie Rose McLaughlin, and illustrations by Jesse Gelaznik—Streaming at: Theater in Quarantine.