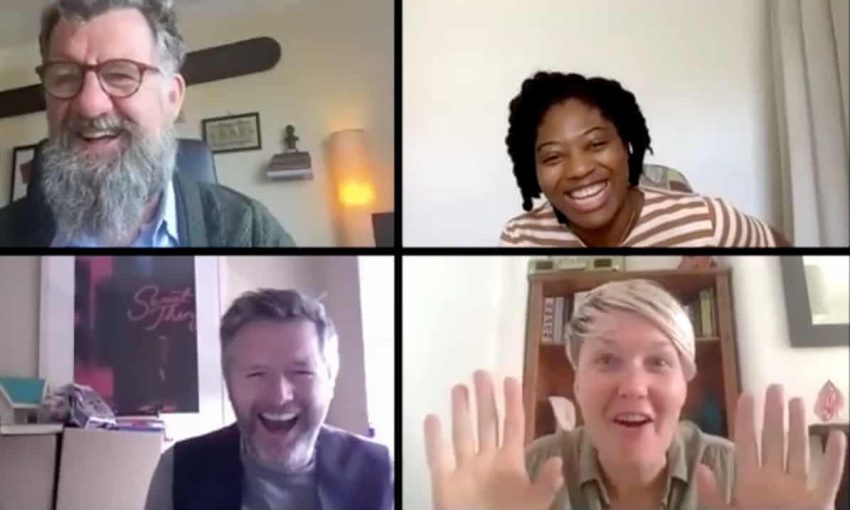 All the members have opinions on the obscene, sexist slur that suddenly appeared on a neighborhood wall. As we become part of their emergency online meeting, I found myself more involved with the interactions of the characters in their little boxes than their debates.

The atmosphere turns tense, and the language terse as soon as the issue of vandalism is raised.

Impassioned Liz (tough Amy Conroy), an interior designer and out-front lesbian, is offended by the scribbled graffiti: “Jessica is a filthy, f’in slut.” Liz says it’s directed at her wife: “It’s a sexist slur… it’s power…and misogyny.” Liz wants to confront the offender in person—so do we.

Conroy makes Liz an admirable champion, fighting for gender parity. She empowers Liz with steadfast convictions we can admire and follow. While some women still choose silence as their defense, Liz reminds us that sexist vandalism “is a declaration of hatred for the female gender.”

Older Phil (placid Steve Blount) and Maggie (apathetic Pom Boy) vote to paint over the slur—make like it never happened. They opt for a security camera—their pathetic, remote solution.

Black medical doctor Gracie (grounded Bethan Mary James) arrives exhausted, after working  with Covid patients all day; she handles the group with aplomb.  But when the camera is suggested, she questions if police would choose to focus on Black villagers—like her younger brother.

During the BLM movement and worldwide protests, Tierney-Keogh could give more life to Black Lives Matter—especially with Dara using #BLM as his nameplate. When “Village” adds Gracie, a Covid first responder and a Black M.D., without exploring the raging pandemic, I feel the absence of her character development.

As tempers rise and wane, the discourse becomes redundant. We ask ourselves: Where is this play going? With every new point/counterpoint, no one has been prodded out of their stereotypical “little box.”

The actors portray their characters with spot-on precision, empathy, and wit, with sharply-etched views and opinions —all in lovely Irish brogues.

“This Beautiful Virtual Village” reminds us that we need to venture out of our comfy boxes, expand our views, and be tolerant. Well worth seeing.

“This Beautiful Virtual Village” by Lisa Tierney-Keogh, directed by David Horan, by Abbey Theatre, Dublin, Ireland—Streaming at: AbbeyTheatre.com, through September 17, 2020.