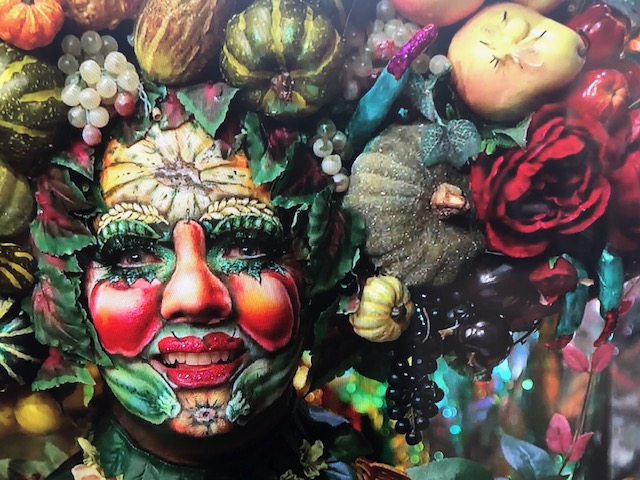 Taylor Mac Dolls Up for a Queer Revolution

In “Holiday Sauce…Pandemic!” Taylor Mac demonstrates that the Holiday season and Covid both steal our taste and endorse capitalism. They force us into isolation, especially the queer 10% of the population. What happens when our individual tastes are suppressed, and we are enlisted in the army of consumers?

Suddenly on the screen, we see an outrageous Taylor Mac all dolled up, with fruits and vegetables painted on her face. A magnificent headpiece filled with fruit, vegetables, and flowers explode against shimmering multi-colored curtains.

Taylor Mac, en femme as “judy” (her chosen pronoun), translates herself into a singing bowl of fruit you won’t find in any Safeway. Carrots, eggplant, pumpkins, pears, tomatoes surround her head like a Greek goddess of harvest or Carmen Miranda.

On her lips are two blushing red cherries with stems—it takes a while to decipher a supermarket full of Nature’s bounty—apples on her cheeks, zucchini on her jaws, squash at her chin—in rainbow hues.  As she states, “Let art be the LSD.”

Judy explains her transformation, taking us through her journey from oppressed little gay boy, rejected by his commercialized family, who chisel at his self-worth. Judy uses a cardboard cut-out cartoon where they are all rolling Christmas balls to dramatize her alienated childhood.

Fleeing their Christmas dinner, she discovers her long-lost Mother Mary. It’s Mother Flawless Sabrina, a drag queen who is singing at a local gay bar.

Mac honors Mother Flawless Sabrina who asserts that we should champion both art and the artist as a form of Civics. At one of her queer pageants, Sabrina announces: “Share the gift with the world.” Sabrina exalts creative art and artists because they memorialize freedom from oppression for the marginalized.

Flawless Sabrina gives judy magical words to live by: “UR the Boss, Applesauce!” She brings fulfillment and joy, explaining: “Everything you are feeling is acceptable.”

In place of suffering, she asserts newfound life. Judy’s mentor smiles down from her portrait on stage—as Mac repeats her mantras: “Normal is just a setting on the Dryer” and “Reality is a mass hunch.”

Sidekick Machine Dazzle speaks to us from inside the decorated Christmas Tree that he has become–which turns out to be his “Surprise Destiny.” He has become his fantasy.

With songs of liberation, Mac offers to unite us with our true selves, to seek our true family. Finally, he celebrates an inspirational, gilt-framed roll-call of queer elders all over the world and locally—celebrating their fabulousness.

As judy, she explores a world that lurks within us, waiting for a timely revolution. Join judy at The Curran for an online revelation.