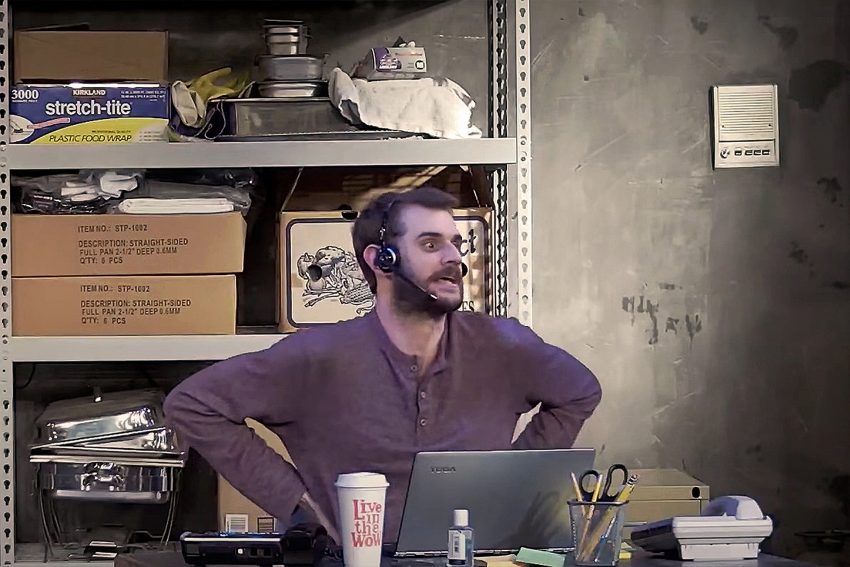 Becky Mode’s original 1999 play has been updated with the names of current stars and notorious one-percenters; but their nasty, privileged treatment of Sam, a beleaguered up-scale resto reservation clerk, hasn’t changed much. The one-percenters still get their demands filled, instantly.

The poor guy on the telephone, buried in the basement of a high-end New York restaurant, fields four constantly ringing phones, all on his own. In his brilliant solo turn, Max Tachis plays funny, talented Sam, who tries to please every snobby person who calls for a reservation—even when the restaurant is “fully committed,” meaning overbooked.

As a struggling gay actor, Sam is also a compassionate son and a hardworking, exploited young guy who is treated like crap—literally!  Tachis brilliantly plays 40+ roles—all the whiners on the phone, his friends, family, and the cruel chef—a tour de force of comic acting.

The staging at Los Altos Stage Company puts us with him in that grim brick basement with harsh steel shelves and supplies. Tachis draws us into in Sam’s anxious world, as we laugh at the endless demands the upper crust keep dumping on him.

Tachis plays his callers’ demanding voices, arrogant attitudes, and picturesque postures while he’s on multiple phones. He snarls in a high pitched tone for the demanding socialite Carolyn Rosenstein Fishburn, who loves saying her musical, polysyllabic name, while being downright nasty.

Tachis intones a bossy Germanic accent for the intolerable, narcissistic chef who rejects TV interviews and despises his patrons. The chef, an relentless bully, has a helicopter waiting. He has no clue about how his worker gets by.

But Sam cannot afford to quit.

When the chef orders him to do insulting work, we may laugh and sympathize with Sam. But I wonder if “Fully Committed” is an exercise in empathy, or humor at the expense of the worker, who is buried out of sight of the elites. Sam’s only route to escape may come by engaging in the same trickery and deceit, himself–a betrayal of his basic character.

Tachis’ versatility shines, as he becomes a sympathetic hero, trying to get home to Minnesota for Christmas. He has to reach up to top shelves to find reception for his cell phone, as he gently tries to soothe his recently widowed Dad. He tugs at our hearts.

Mode’s play is fun to savor, and good laughs abound, and Tachis adapts superbly to each new challenge. But we know that a real-life turnaround is unlikely, even for a paragon like Sam.

With a wink and a laugh, today’s “Fully Committed” asks: “Are we willing to call a halt to the exploitation of the Sam’s in our world?

Cast: Max Tachis (Sam and all others).