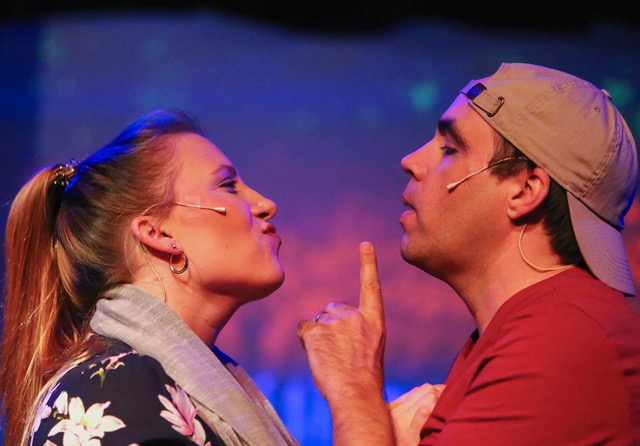 Have you ever reflected on a tragic event in your life, and asked where it all went wrong?  And you found a jumble of memories. Well, here’s a musical that tries to untangle the past . . .

“The Last Five Years” follows a couple from first date, to wedding, to divorce. The show alternates between the two singing alternating songs.  Composer and lyricist Jason Robert Brown starts Jamie’s story with their first meeting, following his story in chronological order. But Kathy’s story goes in reverse–back from their divorce to first date. Their two streams of time flow in opposite directions—a witty and enlightening concept.

At the center of the show, Kathy (Amanda Morando Nelson) and Jamie (Robert Nelson) meet for their wedding, singing together. Their duet, “Ten Minutes,” portrays the peak of their love, marking their change of tones. Kathy goes from heart-broken wife to young girl in love; while Jamie gets more caught up in his own ego.

From the start, Jamie, a young novelist, displays his goofy, excitable nature, with his broad smiles and backwards baseball cap. As time rolls forward, he looks depressed in a cabbie’s hat. He is enamored with his own achievements and harbors a central flaw—he is in love with himself.  Already successful, with an early career book deal, he inflicts great harm on the marriage, becoming less sympathetic with time.

Kathy’s beautiful voice adds both tragic and up-beat emotions to her songs. She starts as an aspiring actress—but auditions rarely go her way. Kathy’s optimism becomes her tragic downfall because love blinds her to the cracks in their relationship—she is asking for too much.

The contrast between their first meeting and their break-up sets the comic vs. tragic tones. Although the song-play opens with a brief glimpse into their first date, we switch quickly to Kathy’s tragic farewell, “Still Hurting.” In her first beautiful, sad melody, she laments her break-up with Jamie, holding the scarf she gave him.

Jamie’s song “Shiksa Goddess” brings forth his sweetness and naivete. He’s excited to finally be dating a non-Jewish girl as he exclaims, “If you like to drink blood, I think it’s cute.” A long list of failed dates with nice Jewish girls leads to his liberation. Photos of his ex-girlfriends fill the background as he names them. Finally, they are replaced by pictures of Kathy, cleverly highlighting her special status.

For me, Jamie’s “Schmuel Song” stands as the height of romance.  Jamie writes it for Kathy, telling the story of a tailor who follows his dreams to happiness. “The Schmuel Song” celebrates their intimacy, but we see that Jamie lives in a literary dreamworld.

As an animated clock dances in the background, Kathy cleverly responds, revealing their mutual attraction. Director Carl Jordan has smartly placed both actors onstage for each song—giving us more of the couple together.

After the show, Jordan holds a vote asking if we are ‘team Jamie’ or ‘team Kathy.’  Find out the results after you watch this fascinating, bittersweet story of a love that flows in two directions.