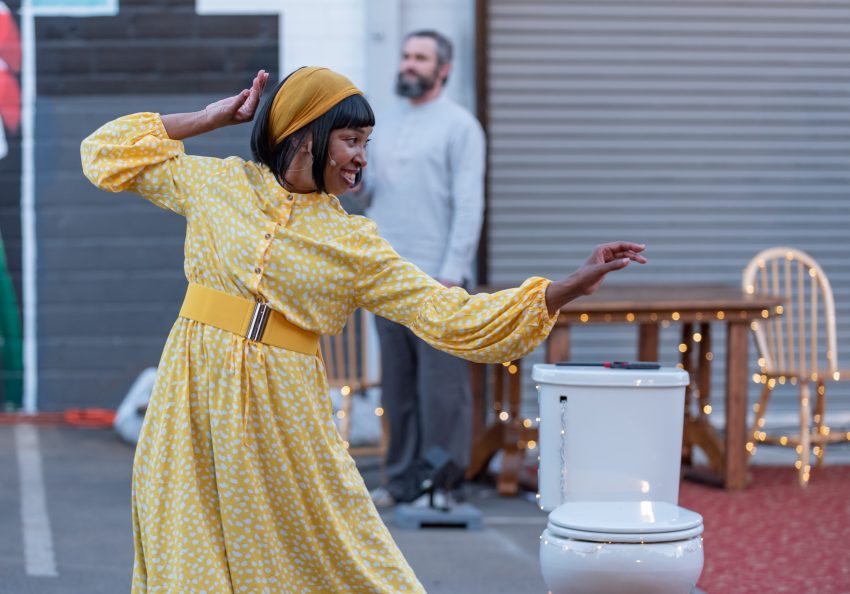 On Sunday night I saw the Oakland Theater Project’s “Begin the Beguine,” a drive-in experience in the carpark of the Flax building in Oakland. William Oliver III, a familiar and much-loved company member, was there to welcome us, directing traffic and helping everyone get parked with our radios tuned. I’d recommend arriving at Flax at 7.30, with plenty of time to walk a few streets away to CURRY UP NOW to pick up a delicious, cheap meal in time for the 8:00 pm curtain.

“Begin the Beguine” is a 90-minute collection of four one-act plays by Black playwright and film-maker Kathleen Collins, co-directed by Michael Socrates Moran and lead actress Dawn L. Troupe. “When They Begin the Beguine” is a famous 1930s song by Cole Porter: when the singer hears the music for the Beguine, a Latin rumba-like dance, it brings back a flood of memories. All four of the evening’s one-act plays embody this experience, as the magnificent Troupe shows us a complex, multi-layered woman for whom the present always lives and breathes under the shifting shadows of memory.

On a small pedestal stage-right sits a toilet. In the first play, “Remembrance,” The Woman (Troupe) describes it as a place of refuge; and in the following plays, it serves as a table for a lighted candle. The toilet as a set piece works brilliantly: plonked right out in front of us for the duration of the performance, it suggests those parts of a life that refuse, tonight, to be discretely tucked away behind soft scents and euphemisms. Grief, rage, jealousy, frustration, deserve to be understood in their absolute specificity. Somehow the toilet insists on this.

There are a few other parts of the set that remain throughout—a small chest and a carpet. A chaise longue is deftly moved around between plays.

Framing the stage, too, are the actors watching the “conversation” of each play. In the first play, the protagonist (Troupe) has a conversation with herself as she contemplates being trapped in life as “Dancer/mammy/daughter/sister/wife.” In the second, “The Reading” (in my view the strongest of the four plays), her conversation is with a white woman (played by the dazzling Margherita Ventura). Another woman (Kimberly Daniels) is briefly present.

The two main players are waiting for an appointment with a psychic, and the white woman, seeking to kill time, confidently and crassly expects that they will share their reasons for being there. Pushing relentlessly with her expectations of what Black women are supposed to – and not supposed to – think and feel, the white woman asserts her right to an unearned intimacy, as well as to a superior level of pain. It’s cringe-making to watch and listen as she evokes some of the microaggressions (and macroaggressions) with which I, as a white woman, could myself have caused hurt as I go about my life.

In the third play, “Begin the Beguine,” we now find Troupe’s character middle-aged and desperate to connect with her son (versatile Leon Jones, who even sings and dances on the table). She talks of her admiration for Zora Neale Hurston, the great Harlem Renaissance novelist and anthropologist. I found this third play rather confusing, as if it wanted to be in several places at once and did not quite make a landing.

In the fourth play, “The Healing,” the woman, Ellen (Troupe) is again paired with a white person, this time Joe (Benoît Monin), who practices the laying-on-of hands. Cool, calm Joe believes that his healing actions can cure all maladies, but Ellen resists his authority, insisting that her pain cannot be treated until she fully knows it.

“Begin the Beguine” is beautifully underscored by music and dance, reaching beyond words to profound reservoirs of feeling. The violin and the harmonica (Leon Jones), the singing (particularly Dawn L. Troupe’s gorgeous voice), the soft-shoe dancing, all lift the unremittingly painful script, affirming that joy and levity can live inside pain.

For me, the four isolated plays don’t quite add up to something greater than the parts—but they have their  own unique beauty, conjuring the protagonist’s search for a higher spiritual meaning that she never finds. Troupe, Jones, and their fellow cast members have given life to this script with beauty, full heart, and artistic strength.