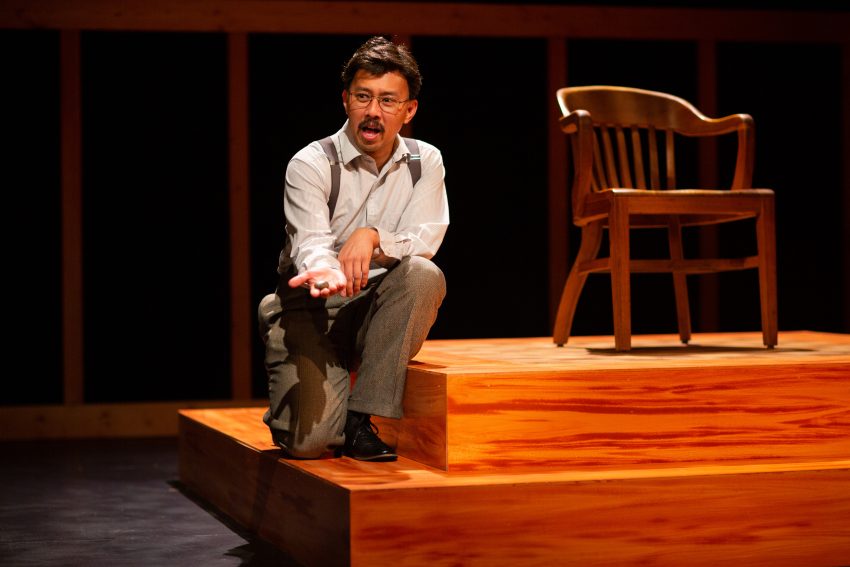 In Jeanne Sakata’s moving “Hold These Truths,” the incomparable Jomar Tagatac takes us into Gordon Hirabayashi’s mind when he stood up against FDR’s racist Executive Order 9066—taking his case to the Supreme Court.

At S.F. Playhouse, Tagatac also plays judges, police, family, and friends—each with a distinct and affectionate touch—morphing into characters in a flash. He holds our attention every moment, revealing how the law works.

But the most moving and tearful aspect of Gordon Hirabayashyi’s story is how the young hero “holds these truths as self-evident,” even while being betrayed by his country.

Why did it take forty years for the U.S. to recognize the illegality of arresting its own citizens who had broken no laws? What is the worth of the Constitution if race-based violence can be unleashed on Asians or any other group?

These are the questions the rise in our minds as we watch the impeccable Tagatac play courageous Gordon, as he enters the University of Washington in 1937—a bright, ambitious, second generation Japanese American. Even in his hometown of Seattle, he has to face rejection when he is turned down for a job merely because of his ancestry.

Dressed in an old-fashioned cardigan sweater, in front of artfully melting U.S. flag videos, Tagatac beautifully embodies the young Gordon’s innocence as he joins the American Friends, the peaceful Quakers.

As fascism takes over Europe, and Pearl Harbor strikes, the Army enforces the order—even though there is no threat from loyal Japanese American citizens.

With a wry smile, Tagatac embodies Gordon’s decision to study with his friends at the University Library, rather than obey the curfew that falls only on students of Japanese ancestry. Even as his family is taken away to the far off camps, losing their home to greedy locals, Gordon pursues his case.

On the raw wooden platform that serves as home, jail, and court, Tagatac fills 100 minutes with Gordon’s evolving personality in the face of assaults by racists, bigots, and police.

When he goes on a Quaker Leadership Training trip, we laugh at his amazement at new freedoms in New York City, where the subway doors open equally for him. In New York, he can go anywhere and not be shut out—a revelation for the eager college student. He tastes a bit of freedom and he develops new ideas.

When he’s sent to a jail in far off Arizona, he has to hitch-hike to get there—on his own. The Phoenix jailer—artfully imitated by Jagatac with a country accent—sends him to a movie in town while they find the paperwork. The system isn’t equipped for Gordon’s radical honesty.

We all need to see this stirring show to understand how the law can be subverted. Gordon inspires us to stand up against hate–and forty years later, the Court reverses its decision. Director Jeffrey Lo shows us how one man can revive the meaning of the Constitution.