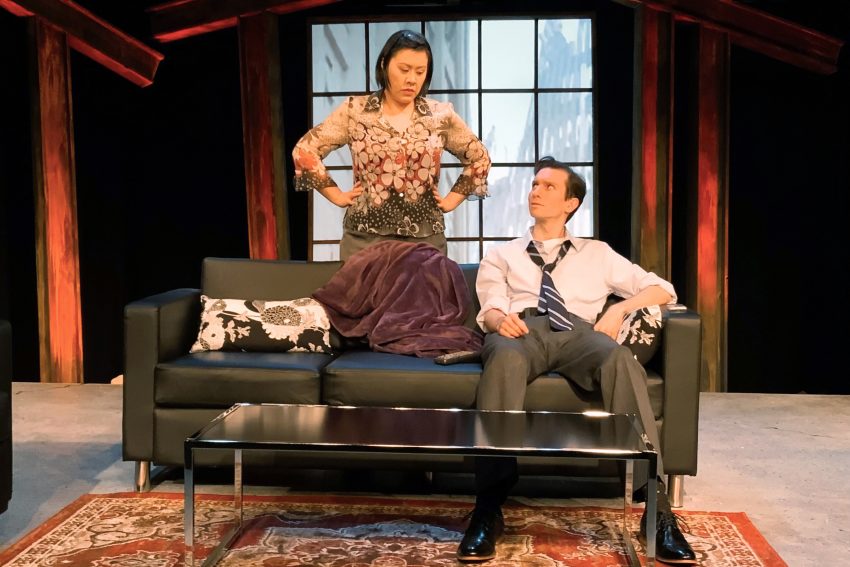 “The Mercy Seat,” under the creative direction of Allie Bailey at Los Altos Stage Company, cleverly exposes a caustic relationship between a younger man and an older woman. And she is his boss. Playwright Neil LaBute highlights gender differences that spill over into morality.

Melissa Jones and Drew Benjamin Jones enhance the machine gun debates between the temperamental duo, Abby Prescott and Ben Harcourt. Captivating and quick witted, Abby turns from sarcastic, to angry, to ironic in a flash. Her lover, Ben, a self-indulging cad, earns our disdain. His escape fantasies poison their rickety three-year affair.

Wiry Ben, in a disheveled suit, sits in Abby’s elaborate loft in freeze-frame stillness. We later unravel that Ben wants to use this major catastrophe as an escape plan from his responsibilities, including his marriage, children, and job! He could play dead and flee his present life. We can’t help but wonder: Will Abby join him in this deception?

Yesterday morning, as the planes struck the Twin Towers, he was skipping work to have sex with Abby in her loft.

Gary Landis has designed an impressive loft integrating stones, dust, and girders splashed with red paint—a mirror for Ben and Abby’s alliance. We are pulled back in time with “Hymn for the Lost and the Living,” by Chris Gekker, and real-time 9/11 video footage.

Ben says, “This could be an opportunity … a meal banquet.”  They could hide out and he would never answer his wife’s repeated cell calls. But Abby centers her concerns on “Why?”

My blood boils at Ben’s adolescent, self-centered obsession with his needs. Abby could work in a “big office” somewhere, while he works in a “lumber yard.” Ben is delusional—and the actors embody their disagreement powerfully.

But Abby still loves him.

Abby asks if his fantasy comes from “survivor’s guilt”; but when Ben says, “No,” we realize that for Ben there is no “moral thing.”

LaBute’s brilliant, rapid fire, staccato dialogue tears apart their three-year affair—while Ben’s phone rings. Abby wants him to answer it, and he refuses.  Like a couple in a verbal war, they dispense with empathy and compassion, enthralling us with their barbs.

As the dialogue continues, and deepens, the narratives lengthen, and even their sexual problems are exposed. Abby and Ben do not see eye to eye, even as they make love. Ben ensures that she is under him, unlike his position at work. He accuses: “You never promoted me … I’m not your underling … I am your colleague.” LaBute shows us they live in separate moral worlds, struggling to find a middle, then manages to add a twist at the end.

Covid is our present-day disaster call. Lives have been thrown off-balance through this last year, our sense of security shattered. See Los Altos Stage Company’s production of “The Mercy Seat.” It gives us food for thought about how relationships are challenged and changed by tragedy.