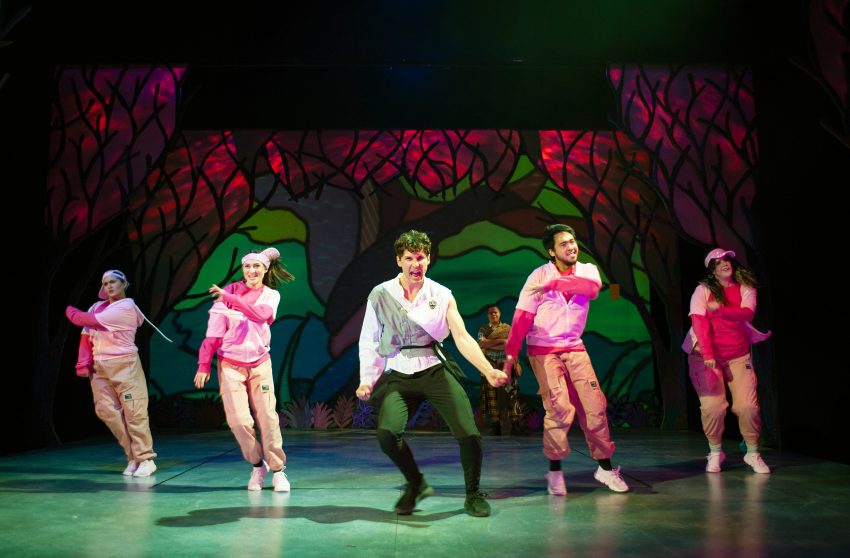 In Director Bill English’s Tiffany-bejeweled Forest of Arden, trees glow with stained glass beauty, while lovers experiment with gender-swap. Arden is a sacred “in-between” place where old ways of loving get revalued, and unexpected affections blossom.

“As You Like It” translates Shakespeare’s romantic comedy into a witty, fun-filled musical with modern gender roles for our time. The SF Playhouse team bridges a dark past, shaping Shakespeare to reflect a new, joyful present.

Designers English and Heather Kenyon whisk us from the dark corridors of the cruel, competitive court to the beautiful and mystical Arden. The spectacular rolling forest transforms the mood, completely. Behind the curtain, Dave Dobrusky and his musicians punctuate the action with verve.

When Deanalis Arocho Resto, dressed in leather, opens the show as the cynical Jaques, she gives fresh meaning to “All the world’s a stage.” Her gender-bending costume tells us we’re in for some new style Shakes—a world for “everybody.”

Costume Designer Kathleen Qiu’s creations combine past and future. From muted brown garb to present day sparkling pink bling. When the De Boys dancers sing “Will U Be My Bride?” they channel youthful energy.

Keep your eye on the charming central couple, Rosalind (River Navalle) and Orlando (Nikita Burshteyn), both outsiders at the cruel court of Duke Frederick (Will Springhorn, Jr.). Nikita displays top-flight musical comedy talents—singing, and dancing Nicole Helfer’s boy band steps with gusto. The choreography is simple and energetic, as the company expresses its bountiful enthusiasm in movement and music.

In Arden, Rosalind disguises herself as a boy, and plays at seducing her Orlando—a classic cross-dressing trick from Shakespeare.

Shaina Taub’s two gay couples, one gay and one lesbian, almost steal the show with their antics. And Orlando’s tyrannical older brother Oliver (Ryan Torres) engages us with his transformation from selfishness to generosity in Arden. Love in the forest conquers the old greed in waves of delight and song.

Taub’s songs run erratically from charming to confusing. Duke Senior (joyful Michael Gene Sullivan) sings, “In Arden”: “How should we learn to be … see the forest for the trees”—a clever ditty. Yet “You Phoebe Me” gets repetitive.

In the in-between world, we leave the darkness of the past and enter a new world. The process of change can be an aha! moment, or a long trip through Arden.

Like love, the songs don’t always hit their mark; but “As You Like It” refreshes our view of change. When lovable, barefoot Duke Senior sings “Still, I Will Love,” the ensemble hits all the notes in a final, bold affirmation of love.