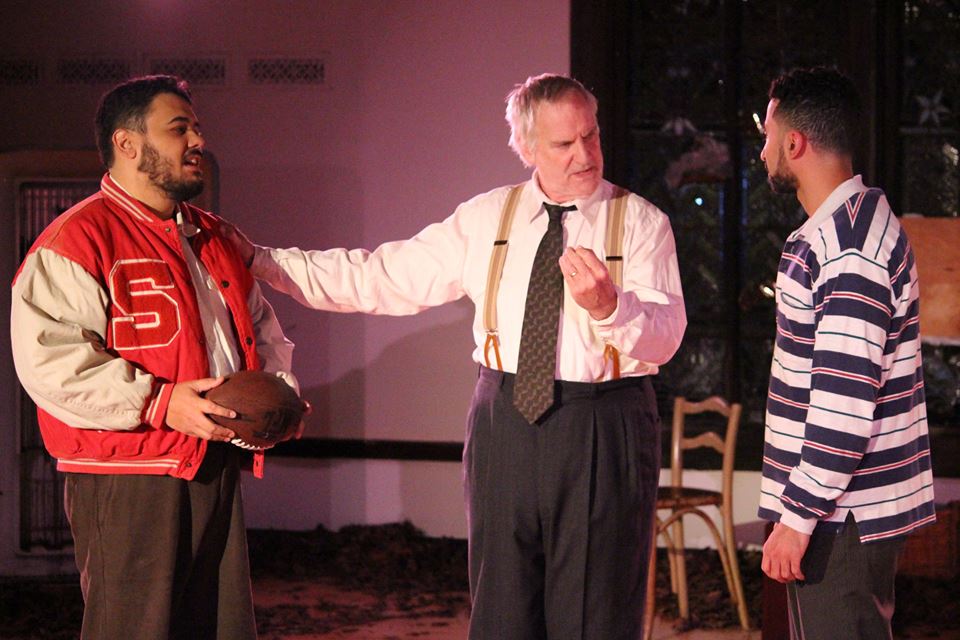 Arthur Miller’s “Death of a Salesman” (1949) exposes the cruelty of the American Dream. Given the rise of Donald Trump, the Ubuntu Theater Project’s production of  Miller’s classic American tragedy “Death of a Salesman,” about the decline and fall of a big-talking, small-time salesman is timely indeed. Willie Loman (Julian Lopez-Morillas), an aging travelling salesman with a New York firm, expresses all the bluff and bluster of a Trump.  Along with his wife and sons, we witness the exaggerated bragging, the false confidence, and a heap of insults. Willie Loman’s speeches are full of bombast and overblown emptiness. He often resorts to shouting people down, especially his loved ones. He is a man obsessed with being “liked,” to the point of childishness. Willie wants, above all else, to be “well-liked.” As hyper-competitive American salesman, Willie is obsessed with being better liked than anyone else.

Like Trump, Loman favors his own version of events over the widely agreed-upon reality. He is incapable of perceiving his son Biff’s blatant failures and continues to idolize Biff irrationally–to the verge of derangement. Willie epitomizes the worst aspects of American Individualism, obstinately resolved to go his own way, even damaging himself and others. He pridefully refuses any handouts, including his neighbor Charlie’s kind offer of a job. Willie constantly measures himself and his sons against his neighbors,with an aggressive competitiveness.

Nonetheless, we should not confuse Willie with Trump. After all, Trump was born into great wealth, “working” with his real-estate developer father, and inheriting that vast wealth.  Contrarily, Willie is a “low” man of little means. He is a man doomed to failure, due to his lack of education, connections, or family wealth. He is a low-paid salesman, exploited and cast aside–a wage-slave to mega-bucks Trump. The cruelty of the American Dream lies its promise of success for all. But the reality is that first, you have to be born into privilege and power.

While Willie’s the Low Man on the totem pole, we can see him as a typical Trump supporter who has nostalgic notions of the “good-old-days.” Willie fears and dreads a changing, racially diverse America. He is cast adrift when he is fired from his pitiful commission-based job, and loses his identity, his earning power, and his family. Many U.S. workers like Willie Loman are dying from drugs, alcohol, and suicide, today.

One of the ironies of this production is that Willie’s ethics explicitly oppose the mission statement of the Ubuntu Theater Project. Ubuntu is a Zulu proverb that means “I am because we are” and “I am a person through other people. My humanity is tied to yours.” Ubuntu means mutuality, co-operation, and connectedness: everything which Willie and Trump deny. The Ubuntu Theater Project has advanced their goals through multiracial casting. In this production of Miller’s play, Willie’s wife Linda (Dawn Troupe) and their sons Biff (Nathaniel Andalis) and Happy (Mohammad Shehata) are played by diverse actors. Multicultural casting opens up theater-going to younger audiences. Moreover, showing diversity on stage shows that classic American plays, can illuminate our present predicament.

When Willie is fired by his boss Howard (Erik-Jon Gibson), we must think of Willie’s anger and confusion in both class and racial terms. We are looking at the crisis of white male identity in America in the age of Obama.

The racially diverse Loman family gives us a vision of a new American family. Willie’s mental breakdown brings pain to all his family members. And the exploitation and suffering of workers from all ethnic groups brings pain and danger to the rest of an interconnected nation. By redefining the American family, Ubuntu highlights the deep tissues that connect us all. “I am because we are.”