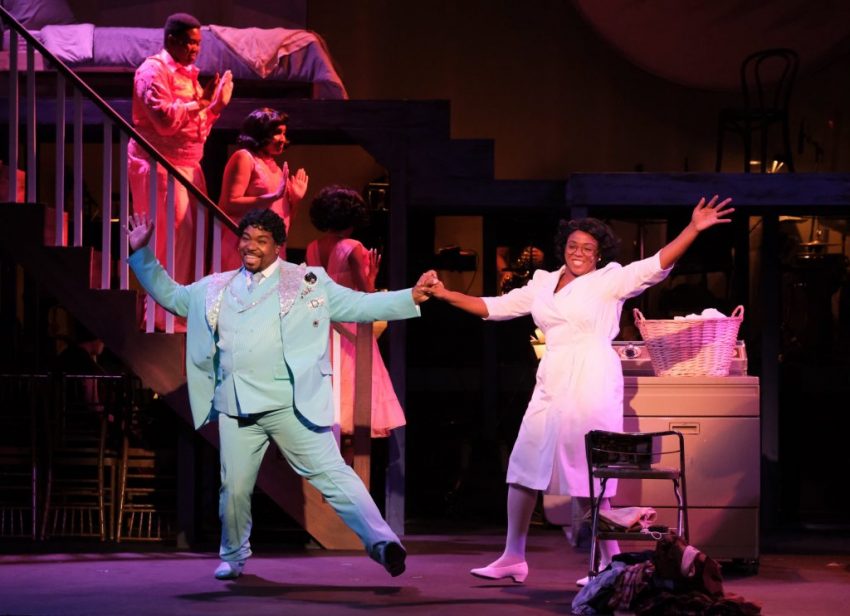 Deprivation lies at the heart of 60s America, whether it follows color, gender, or social class. In “Caroline, or Change,” eight-year-old Noah is deprived of love; his stepmother Rose seeks independence; and their Black maid, Caroline, seeks reprieve from poverty and racism—all in 1963 New Orleans. But writer Tony Kushner (“Angels in America”) and composer Jeanine Tesori (“Fun Home”) let us know that ‘Change’ is coming.

Brice opens the show intoning: “Nothing ever happens underground in Louisiana. / There’s only under water in Louisiana …” Kushner’s lyrics and Tesori’s music weave a mysterious web around Caroline’s unrest and struggle.

Kushner reminds us that positive social change takes time.  The Moon (mellifluous, operatic Jacqueline Dennis) echoes above in purple robes. She tells us it takes many moons for change to happen. Some nights will be downright hellish.

Waiting for The Bus  (powerful Martin Bell) after work, Caroline is annoyed by her helpful friend Dotty (enchanting Phaedra Tillery). The two maids take opposite views on how to deal with white employers. Dotty and Caroline see the world through different lenses, but The Bus brings tragic news to both about “our almost friend,” JFK.

The musical brilliantly depicts the generation gap. Caroline must acquiesce to the needs of her bosses. Noah’s stepmother, hard-edged Rose Stopnick, (elegant Katie Pimentel) comically demands obedience. She doesn’t even know what she is demanding from Noah and Caroline.

But Caroline’s daughter, sixteen-year-old Emmie (astounding Markalia Dyson) refuses to bow to white folks. Emmie sings out her determination not to be bossed around like her Mom. She will never bend to being a maid.

Director Jenn Bevard packs loads of entertainment and bounce into Tesori’s score, even when the sound system gets shrill.  The cherries on top are Caroline’s adorable kids—darling Royal Mickens and cuddly Antonio Banks. These kids have sweet voices to match their acting chops.

From traditional Jewish songs to hopping dances, the beat goes on.  The central thrill in “Caroline” comes from surprising connections between rich and poor, white and black, young and old—in hopes of making a better America. “Caroline” creates change by crossing race, class, and generations. Enjoy a unique, harmonious evening of dancing machines and inspiring songs!