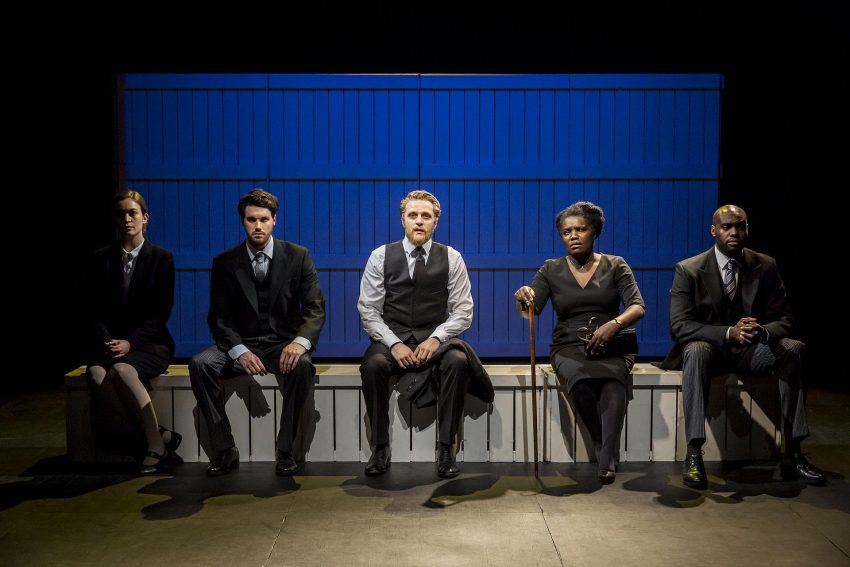 “The Winter’s Tale” remains my favorite play for its extravagant emotions. Could it be Leontes’ angry misguided jealousy aimed at his friend? Or, the bittersweet ending of his wife’s brief resurrection? Or, maybe it’s the unbridled joy of a random bear changing the destiny of two nations.

In a stirring performance, Cheek by Jowl Theatre reminds me that my love for “Winter’s Tale” begins with Shakespeare’s mingling of romance and tragedy, madness and comedy. As wise Paulina comments on the miraculous statue of Hermione: “So much the more our carver’s excellence. / Which lets go by some sixteen years and makes her / As she lived now” (V.3.).  Cheek by Jowl turns a fairy tale into an enduring modern story of anger and regret.

As angry Leontes, Orlando James pours power and woefulness into his every word, revealing Leontes’ suspicious and manic sides. James portrays the shame and mourning that bring Leontes down.  He combines brash physical movement with deranged laughter for Leontes’ narcissistic hatred. The King’s wild anger affects Queen and court; the cast confronts the tension he brings to each scene.

As the loyal, loving Queen Hermione, Natalie Radmall-Quirke delivers a moving and magical wife. When she defends herself against Leontes’ mad accusations, we feel her sorrow. Beyond her humble defense, Radmall-Quirke’s portrayal of Hermione as statue in the final scene is masterful. She remains still to the eye for ten minutes of dialogue, without a twitch.

All the while, her wise friend Paulina (superb Joy Richardson) advises the king, trying to calm Leontes’ unwarranted paranoia, in an inspired performance.

A multi-purpose room-sized wooden crate sits upstage for us to ponder for the first hour. The giant shipping crate is closed, its purpose a mystery. But, when Leontes and Hermione’s son, Mamillius (Tom Cawte) dies, the crate throws open its doors with a crash. Suddenly, we see the still body of the boy, in the play’s most chilling moment.

The ominous crate becomes the panicked deck of a storm-tossed ship, when loyal counsellor Antigonus (Peter Moreton) flees to Bohemia to dispose of the new-born Perdita. In that pivotal moment, the natural world revolts against man-made disasters—and an angry bear noshes on the nobleman. The implacable world of Nature—storm and creature—revolts against human division and destruction.

In Shakespeare’s late Romance, that elusive bear is still a tricky part. Can we maintain our suspension of disbelief faced with such fantasy? How can one make a stage-bear intimidating?

Cheek by Jowl projects a fearsome bear-video against the coffin-crate as Antigonus screams in horror. The bear’s blurred image and brazen roaring create shock and fear, making us all feel attacked. Nature has turned on man.

My only gripe centers on Autolycus (Ryan Donaldson), the play’s mischievous rogue. Director Declan Donnellan takes the vagabond trickster to new frantic heights, as he cracks jokes, plays guitar, and speaks directly to us. While this Autolycus delights us, his breakneck pranks distract from the anger, danger, and lost infant. Donnellan’s rock-star jester strays from the script of an otherwise spectacular retelling of his finest romance.

Highest praise for Donellan’s whirlwind staging, taking us from demented tragedy to heartwarming final moments. See how thrilling Shakespeare can be—thanks to Cheek by Jowl.

“The Winter’s Tale” by William Shakespeare, directed by Delcan Donnellan, designed by Nick Omerod–Streaming at CheekbyJowl.org