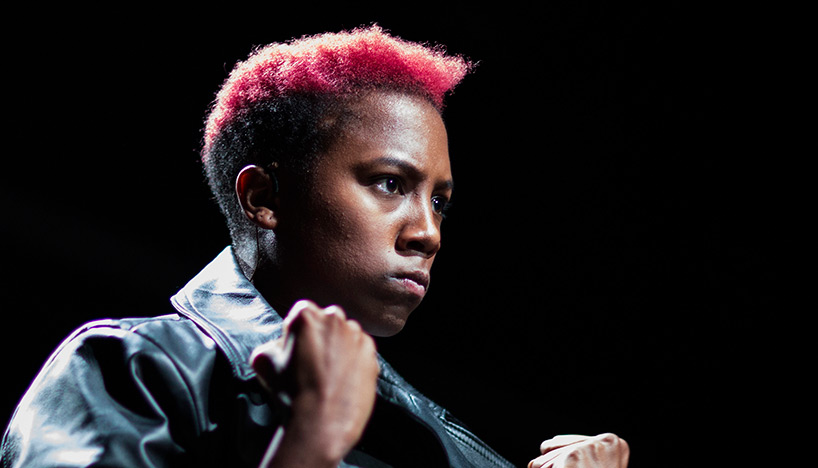 In Director Phyllida Lloyd’s “Julius Caesar,” the actors appear as inmates in a women’s jail, fighting to mount their production under prison authority. First, a young woman shyly explains how she ended up in jail; then the inmates are marched in by guards. The opening minutes are in modern speech—there’s even a horoscope reading.

Then the women turn, and we’re suddenly in Shakespeare’s world—thrilling and raw and wonderful.

Women play all the parts, but it’s the last thing you notice. As the New York Times critic notes, “This ’Julius Caesar’ generates a higher testosterone level than any I have seen.” Prison provides plenty of metaphor for power struggles, resistance, and, god knows, violence. Savagery and the stark prison oppression parallel the wrongs in Shakespeare’s ancient Rome. And this corrupt Rome explodes into a violent, bitter prison riot that could be here and now.

Have a friend who avoids Shakespeare?  This Donmar Warehouse version provides their path in. The heavy metal music for battle scenes rocks in every sense. The stripped-down stage, bold film editing, and hand-held shooting put us in the center of the action. These film techniques stand out in the startling scene where the characters revert to inmates rioting and their violence feels all too real.

In a time when the right wing plans to kidnap the governor of Michigan, and Trump dog whistles while Covid reigns, you might find it odd I recommend a play with dirty politics, state tyranny, and imminent death—but it’s that good.

Lloyd’s “Julius Caesar” builds steadily to an unexpected ending where Harriet Walter, no longer Brutus but a cornered inmate, stutters a final few words in a broken voice—bringing home the never ending fight against injustice.  Shakespeare didn’t write that last speech, but he’d like the scene. It’s a heart-breaking finale to a glorious, powerful, and completely modern production.

“Julius Caesar” was filmed in front of a live audience in London at the Donmar Warehouse King’s Cross, in December 2016. It’s the first of three of Shakespeare’s plays that Saint Ann’s Warehouse is offering FREE online in October: ”Henry IV” and “The Tempest” will follow. Harriet Walter leads the cast in all three productions. Finally, Shakespeare for the People.